Auchope Cairn is a subsidiary summit of the Cheviot, beside that of Cairn Hill half a mile to the east.

Twin tops stand here, both on the boundary of Roxburghshire and Northumberland, both to the west of the summit of Cairn Hill. Both stand barely rising over the summit plain in comparison to the lofty ground of the Cheviots.

The top to the north-west at NT891198 rises to 2,382 feet and is the point principally known as Auchope Cairn. Its sister a little to the south-east at NT895193 rises higher though, to 2,438 feet, and this latter top is the county top of Roxburghshire.

Auchope Cairn rises less than 50 feet above the surrounding ground on all sides. It is effectively a part of Cairn Hill, though this in turn is in truth a top belonging to the massive bulk of the Cheviot, Northumberland's own highest hill. Auchope Cairn stands on the western extremity of the Cheviot.

The view from Auchope Cairn has been described as one of the most outstanding views in Northumberland, and this in a county known for the beauty of its mountaintop views.

The view far out over the lands to north and south have inspired hyperbole:

“….enjoy the breathtaking views in all directions, the Tweed Valley, the North Sea and the Northumbrian Coast, the mountains of Tweedsmuir faint and far between the triple sentinels of the Eildons”. [2]

On the other hand, Tony Hopkins in the 1989 Pennine Way National Trail Guide called the hill "the most exposed and uncomfortable place on the whole ridge" and Alfred Wainwright, in Wainwright on the Pennine Way (1985) said wryly of the view from Auchope Cairn that it "commands a wide prospect of the terrain still to be crossed".

The walker descending from the Cheviot northwards on the Pennine Way may reflect that his journey is nearly at an end, for its it foot lies the quiet village of Kirk Yetholm, which is the end of the Way.

For all the superlatives expended on Auchope Cairn, a plain description is that it is a summit strewn with broken rock, scoured by the wind and where the weather descends swiftly. It is however well worth the climb. 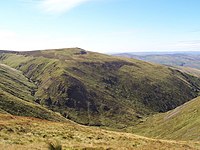 A walker may avail himself of any of several routes up the mountain. It is 5 miles from Mounthooly in College Valley, a dale worth a visit for its pretty scenery, though it is private land with restricted access. Following up to the head of the dale, the path leaves the verdant valley and runs into a rocky gap through the hills to a gorge where the burn runs over wee cataracts toward the dale below. This path leads to the famed Hen Hole.

From the Harthope Valley, south-west of Wooler, it is nine miles, by way of the Cheviot summit.

From the boogy summit of the Cheviot Cross is a stone pathway laid down to allow walkers to pass this way without vanishing in the marsh. A fence guides the way past a small tarn on to Cairn Hill. Continuing past this summit, follow the fence to the signposted Pennine Way and north-westwards lies Auchope Cairn.

Name of the peak

The name "Auchope Cairn" comes from the farmstead of Auchope some three miles from the cairn. That name has been found in the 18th century and is presumably older. "auch" means "ash tree" of "rowan" and "hope" is the common Scots name for a valley (from the Old English hop). The name "Cairn" refers to the cairns on the two mountain tops. The name may have been constructed by the surveyors of the Ordnance Survey.