Tattershall is a village and parish in the Lindsey part of Lincolnshire. It is situated on the A153 Horncastle to Sleaford road, a mile east of the point where that road crosses the River Witham. At its eastern end, Tattershall adjoins the village of Coningsby, with the two being separated by the River Bain. In the same parish is the hamlet of Tattershall Thorpe.

The 2011 census recorded a Tattershall civil parish population as 2,834, with the combined Tattershall and Coningsby area having a population of 6,698.

Local public houses are the Black Horse on the High Street and the Fortescue Arms in the Market Place. The Fortesque Arms dates from the 15th century and is a Grade II listed building.[1] Barnes Wallis Academy (built 1954) is a secondary modern school on Butts Lane for pupils aged from 11 to 16. The school also serves Coningsby and Woodhall Spa.[2]

Tattershall Carrs forms the last remaining remnants of ancient wet woodland, dominated by alder that once ringed the margins of the Fens.[3][4] Bomb shelters on a former RAF site at Woodhall Spa have been converted into bat roosts.[5] 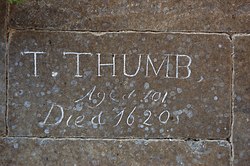 Grave of Tom Thumb
Village historic sites include the church of the Holy Trinity, a buttercross, Tattershall Castle, Collegiate College, and Tom Thumb's house and grave. 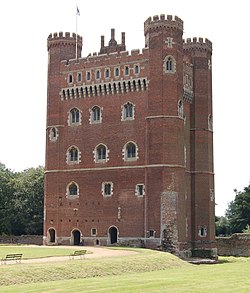 Tattershall Castle was built in 1434 by Ralph de Cromwell, 3rd Baron Cromwell - Henry VI's Lord High Treasurer - on the site of an earlier 13th-century stone castle, of which some remains are extant, particularly the Grand Tower and moat. 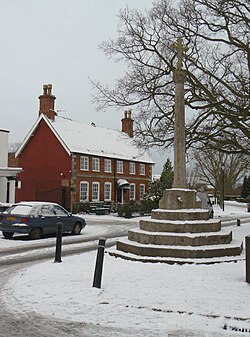 An octagonal 15th-century buttercross stands in the Market Place. It is both a Grade-I listed structure and an ancient scheduled monument.[6] A charter to hold a weekly market was granted by King John in 1201 in return for an annual fee of a trained goshawk.[7] Markets are no longer held but the buttercross remains at the centre of a shopping area.

Tattershall railway station was a station on the line between Boston and Lincoln until closure. The Old Station House, a stationmasters house and ticket office, is a Grade-II listed building[8] as is the former Goods Shed.[9] The former railway line has been converted into a cycle path at a cost of £2 million. The path was officially opened in October 2008.[10] 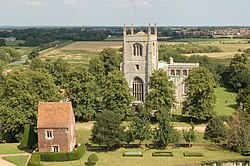 Adjacent to the castle is the Grade-I-listed Perpendicular-style Holy Trinity Collegiate Church, endowed by Ralph de Cromwell, 3rd Baron Cromwell, but built after his death.[11] It received its charter from Henry VI in 1439 but building was not begun until 1472, reaching completion around 1500. The church has mediæval stained glass, a collection of brasses and an intact rood loft. It was restored between 1893 and 1897.[11]

Near the font is a plaque marking the grave of the Tattershall resident Tom Thumb, reputedly 18½ inches tall, who died in 1620 aged 101. Tom Thumb's small house can be seen on the roof of a larger house in the Market Place.[12]

The churchyard contains a war grave of an officer of the Dorsetshire Regiment who died during the Second World War.[13] 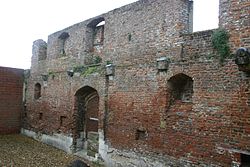 Adjacent to the Market Place are the remains of Tattershall College which was built by Lord Cromwell for the education of the choristers of Holy Trinity Church. The College was an example of perpendicular-style Gothic architecture. In the late 18th century it was converted to a brewery, and later left empty – today it is a ruin. The walls that remain are supported by modern brick. Heritage Lincolnshire currently manages the site, which is Grade II* listed, and an ancient scheduled monument.[14]