Tamworth Castle is a Norman castle on a man-made hill in the heart of Tamworth, in that part of the town that lies in Warwickshire.

Overlooking the River Tame, the site has been fortified since Anglo-Saxon times, at least since Æthelflæd, Lady of the Mercians, built a burh to sedure the area against the Danes. The town and possibly the hill itself had long served as a residence of the Mercian kings. Rebuilt and enlarged by the Normans, Tamworth Castle is today one of the best preserved Norman motte-and-bailey castles in Britain.

The Castle's motte resembles a natural hill but is manmade: it may be the largest man-made hill in Britain after Stone Age Silbury Hill.

Today the castle is a Grade I listed building.[1]

Tamworth Castle above The Lady Bridge

There is a long-standing tradition that Æthelflæd, Lady of the Mercians, built a castle at Tamworth in 913. Certainly she built a fortress known as a ‘’burh’’ to defend Tamworth but in form it took is unknown nor has it been revealed by archaeology.[2]

The castle of today was built by the Normans in the 1080s, occupying the south-western part of the earlier borough.[3] It dates primarily from the 11th and 12th century and was constructed in the typical Norman motte and bailey fashion.[4] Following the Norman Invasion of 1066, Tamworth was granted to Robert Despenser, steward to William the Conqueror. Robert died childless and so the castle passed to his brother Urse d'Abetot's daughters, one of whom, Matilida, married Robert de Marmion. The Marmion family, from Fontenay-le-Marmion, Normandy, held the castle for 6 generations from c.1100 - 1294. The Marmion family were hereditary champions to the Dukes of Normandy and then the new Kings of England. This role required them to offer a ceremonial challenge to those who would oppose the King, at the coronation ceremony.[5]

Robert Marmion, 3rd Baron Marmion of Tamworth (1185 – 1218), also known as "Robert the Justice", was appointed "Head of the Itinerant" by King Henry II; a role equating to a mobile Lord Chief Justice. In 1215, during a campaign in France, Robert deserted King John and switched to support the French King. In retaliation John ordered Robert's son Geoffrey to be imprisoned, all of Robert's lands to be confiscated and Tamworth Castle to be demolished.[5]

“Go without delay to the Castle for Tamworth and to hold and retain it. With all possessions, horses, arms and harnesses, so that he shall throw it down immediately” -- King John, 30th December 1215[5]

The castle was at least partially demolished, however, following John's death the following year (1216) Robert's sons were able regain their father's lands.[5]

The last of the Marmions to own Tamworth Castle was Philip Marmion (1241 - 1291). Philip was a close supporter of King Henry III and received large gifts in return for remaining loyal to the King during the baron's revolt. Henry III is thought to have visited the castle in 1257. Philip had no legitimate sons and so the castle passed on his death (c.1291) to his daughter. In 1294 she, however, died without an heir and the castle passed to her niece (daughter of another of Philip's daughters), Joan: wife of Sir Alexander Freville.[5]

The Freville family (or de Freville), originally from Cambridgeshire, held the castle until 1423. Baldwin de Freville died leaving a two-year-old son, and three daughters; his son died a minor and in 1423 the castle passed to the eldest daughter, Elizabeth, and her husband, Thomas Ferrers of Groby.[5][6] 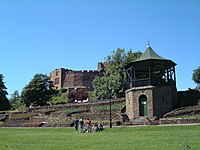 The castle keep and the Castle Pleasure Grounds

Numerous additions were made to the castle over the centuries, especially in the Jacobean period. The shell keep contains a 12th-century gate tower and later residential accommodation in an H plan comprising a 13th-century three storey north range, and a 17th-century Jacobean three storey south range linked by an oak timbered Great Hall of the 15th century.[1]

During the Civil War, the castle was captured by Parliamentary forces after a brief siege and Waldyve Willington was appointed the castle's governor.[7] In July, 1645 the castle garrison comprised ten officers and 77 soldiers under the command of Governor Willington. A muster of the garrison on 28 May 1646 lists only 23 soldiers, "the rest of the soldiers being about fiftie are at Lichfield Leguer uppon dutie there with Lt. Ensigne, one sergeant, one corporal and one drummer".[8]

In 1668 the castle passed to the Shirleys of Chartley. and then in 1715 to the Comptons when Elizabeth Ferrers married the 5th Earl of Northampton.[6] During the Comptons period of ownership the castle fell into disrepair but in 1751 Charlotte Compton, the grandniece of 1st Earl Ferrers married George Townshend of Raynham.[6] The Townshends took up residence and the castle was much improved by them in 1781.[6]

During most of the 19th century the castle was let out to tenants including Robert Peel and from 1869 to 1891 Thomas Cooke. On Cookes death the Marquess Townshend put the castle up for sale by auction and it was purchased by the Tamworth Corporation.[6]

The castle was also depicted in a work by the English Romantic artist J.M.W. Turner, entitled simply ‘’Tamworth Castle’’.