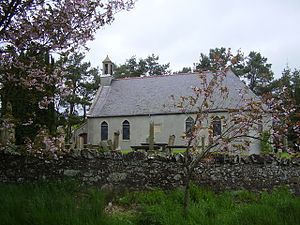 Symington is a small village and parish in Lanarkshire, three miles south-west of Biggar, 10 miles east of Douglas and 13 miles south-east of Carluke. Geographical features near Symington include Tinto Hill, the Coulter Hills and the River Clyde. This place derived its name, originally "Symon's Town," from its ancient proprietor, Symon Loccard, who, having in the reign of Malcolm IV obtained a grant of the lands, fixed his residence here, and also erected a chapel, which subsequently became the parish church.

The Symington, Biggar and Broughton Railway operated initially between 1858 and 1861 between Symington and Peebles (West), with nine stations, including Stobo railway station. Its successor was the Caledonian Railway Main Line.

Symington was painted by John Pairman of Biggar around 1830.[1]