Steeple Aston is a village and parish on the edge of the Cherwell Valley, in the Wootton Hundred of Oxfordshire, about seven miles west of Bicester and ten miles south of Banbury. The 2011 Census recorded the parish population as 947.[1]

The earliest evidence of occupation in the area is an Iron Age burial site in the west of the parish near Hopcroft's Holt.[2][3]

The Domesday Book of 1086 records Steeple Aston as Estone, derived from East Tun meaning "east village". By 1220 it was Stipelestun, with the "steeple" prefix probably referring to the church tower.[2] It also records that Odo, Bishop of Bayeux was overlord of the manor of Steeple Aston.[2]

The Holt Hotel at Hopcroft's Holt, about a mile south-west of the village on the A4260 main road began as a coaching inn in 1475. It was frequented by the 17th century highwayman Claude Duval who is said to haunt it.[4] In 1754 the licensee and his wife at Hopcroft's Holt were murdered.[2] In 1774 the inn at Hopcroft's Holt was called the King's Arms.[2]

The village has several 17th-century buildings from the Great Rebuilding of England. The School formerly occupied a building in North Side built in 1640. Next to it are Radcliffe's Almshouses which Brasenose College founded in the 1660s. In South Side, Grange Cottage is early 17th century and Manor Farm House is late 17th century.[5] 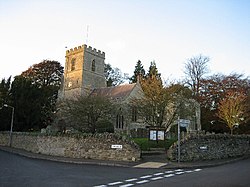 The Church of England parish church of Saints Peter and Paul is 13th-century, with subsequent Perpendicular Gothic alterations, and the architect John Plowman restored it in 1842.[5] The parish church is the source of the Steeple Aston cope, an important piece of 14th-century embroidery now on loan to the Victoria and Albert Museum in London.

The church tower has a ring of eight bells.[6] Richard Keene of Burford[7] cast the three oldest bells in 1674 and 1675.[8] A further bell was cast in 1700 by one of the Chandler family[8] of bell-founders from Drayton Parslow[7] in Buckinghamshire. Two bells were added in the 19th century cast by the Whitechapel Bell Foundry: one cast by Thomas Mears II in 1827[8] and the other, the present tenor, cast by Mears and Stainbank in 1879.[8] This completed a ring of six bells,[2] with the smallest of the Keene bells being the treble. In 1986 the Whitechapel Bell Foundry cast two slightly smaller bells which were added as a new treble and second bell, increasing the ring to eight.[8] SS Peter and Paul has also a Sanctus bell, cast in 1701 by Henry Bagley II,[8] who had foundries in the Northamptonshire villages of Chacombe and Ecton.[7]

Steeple Aston had a small number of recusants in the 16th, 17th and 18th centuries and a small number of Quakers in the 17th century.[2] Methodist meetings were held in the home of one of the villagers for a few years early in the 19th century but had ceased by 1817.[2] Meetings were held in 1838 and 1839 to hear Primitive Methodist preachers and were well-attended despite uproarious organised protests.[2] A Methodist chapel in South Street was opened in 1852. It was used for worship until 1968 when it was converted into a private residence.[2]

Steeple Aston lies east of the A4260 road between Banbury and Oxford. To the east it is linked with Bicester by the B4030. About a mile south-east of the village is Heyford railway station providing a rail link to Banbury, Oxford and Birmingham. The nearest motorway access is via junctions 9 or 10 of the M40.

Steeple Aston village has one public house. The Red Lion opened in 1903 and is controlled by Hook Norton Brewery.[9] It previously had another pub, The White Lion,which opened in 1870. There is also The Holt Hotel public house on the edge of the parish on the A4260 main road about a mile south-west of the village.

The village has a village shop and post office, school, pre-school, village hall, and a sports and recreation club and sports pitch. Annual parish events include the Whit Races, and the spring and summer flower shows. A mobile library also calls at the village on alternate Thursdays.

The Steeple Aston Players is an amateur dramatic group that regularly perform plays in the village.[citation needed]

Steeple Aston Village Archive (SAVA)[10] holds annual talks and exhibitions and has produced CDs and books, all on the subject of the village's history. In September 2013, SAVA moved into its new Village History Centre adjacent to the Village Hall, which is open every Saturday morning or by appointment.

Steeple Aston Cricket Club is a village side with players aged between 10 and 59, playing against surrounding villages. In the last ten years, the club has won two thirds of its matches. 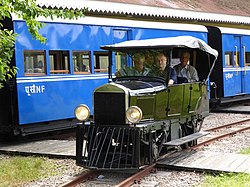 On the edge of the village is the narrow-gauge Beeches Light Railway owned by Adrian Shooter.

In 1988 parts of the village were designated a conservation area.

Steeple Aston has one school, Dr Radcliffe's Church of England Primary School, in Firs Lane.[11] Dr. Samuel Radcliffe, principal of Brasenose College, Oxford,[12] founded it in 1640 along with a pair of almshouses.[2]

Most secondary school pupils from the village attend The Warriner School, Bloxham near Banbury.