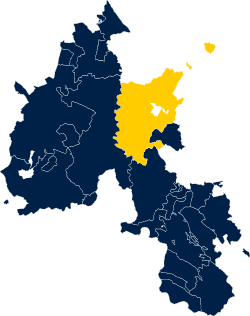 Ploughley Hundred is one of the hundreds of Oxfordshire. It is situated in the north-east of the county, bounded to the north by Northamptonshire; to the east by Buckinghamshire; to the south-east by Bullingdon Hundred; and to the west by Wootton Hundred. The hundred also has some detached parts of the border of Pyrton and Ewelme Hundreds. Unlike most of the other Oxfordshire hundreds, which were named after vills, Ploughley took its name from a barrow in Fritwell parish in the extreme north-west of the hundred.[1]