Burford is the western-most town of Oxfordshire. It is a small town standing on the banks of the River Windrush in the Cotswold hills in western Oxfordshire, some 18 miles west of Oxford, and only two miles from the Gloucestershire border. It is one of the towns of the Cotswolds famous for its beautiful setting and honey-coloured cottages.

A small market town on a steep hill, its status as a 'gateway' to the Cotswolds brings large numbers of tourists in the summer months.

Its prosperity through the wool trade have led to what is undoubtedly one of the finest churches in the country, St John the Baptist, given a rare five stars in Simon Jenkins' 'Thousand Best Churches'. The town was also an important staging point on the way to London and featured many coaching inns. As a legacy today, the A40 trunk road stretches on to Oxford and ultimately on to London. Also of note is the Hufkins tea rooms and bakery. 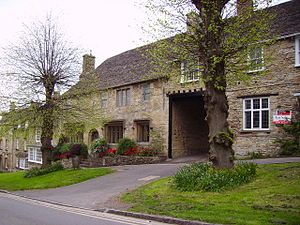 This Oxfordshire article is a stub: help to improve Wikishire by building it up.
Retrieved from "https://wikishire.co.uk/w/index.php?title=Burford&oldid=26672"
Categories: