Scarisbrick is a village and civil parish in Lancashire. The A570, the main road between Ormskirk and Southport, runs through Scarisbrick, and much of the village lies along it. As a result, it does not have a traditional village centre, though the junction with the A5147 is close to the geographic centre.

Scarisbrick literally means "Skar's slope" and comes from the Old Norse Skar (a personal name) + -es (possessive) + brekka ("slope"). It is thought that the personal name is Danish, though the second element suggests Norwegian settlement. The "slope" may refer to a slight incline between two streams near the site of Scarisbrick Hall. The name was recorded as Scharisbrec c.1200, Skaresbrek in 1238, and finally Scarisbrick c.1240.[1] 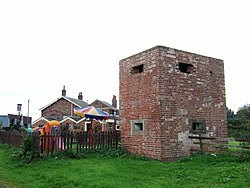 In its early history, travellers tended to avoid Scarisbrick township. Martin Mere, a large lake with associated marshlands and peat bogs, made the immediate area quite difficult to cross. Much of the flat land between Southport and Liverpool is polder reclaimed from marshes and the lake. The modern-day hamlets of Barrison Green, Bescar, Carr Cross, Drummersdale, Hurlston, Pinfold, and Snape Green were formed from the early farms and settlements that did arise in the area.

Scarisbrick still contains many structures and artefacts from its past. The Old School House, constructed in 1809, has served several roles in its history and now contains two residences. A pillbox constructed during World War II can be found near a bridge over the Leeds and Liverpool Canal. It was from Pinfold, where the canal is closest to Southport, that William Sutton picked up waterway passengers for transport to his "Original Hotel", known better as "Duke's Folly" - the foundation of Southport. The canal now is used for recreational purposes. The only Catholic church there, St Elizabeth's, was founded by the Marquis of Casteja and was named after his wife. There are many other churches there as well.

"Wheelwrights House", a former workshop located on Southport Road, is another of the many listed buildings in Scarisbrick.[2]

Scarisbrick is situated on the A570 road, which runs north-west through the parish between Ormskirk and Southport for a distance of approximately five miles. The A5147 road, which runs north from Maghull through Halsall, terminates at its junction with the A570 at Scarisbrick. There are also two B roads, the B5242 which leads towards Burscough, and the B5243 which provides an alternative route into Southport. The nearest motorway links are junction 3 of the M58, just over four miles to the south-east at Bickerstaffe, and junction 27 of the M6, which is about eight miles due east at Wrightington.[3]

Bescar Lane railway station, which opened in 1855,[4] is situated on the Manchester to Southport Line. As of May 2015, trains generally operate eight times a day Monday–Saturday in each direction, travelling westbound to Southport (12–15 minutes) and eastbound to Manchester stations via Wigan Wallgate (65–70 minutes). There are no train services at Bescar Lane on Sundays.[5]

Heathey Lane Halt, a station on the Barton branch of the Lancashire and Yorkshire Railway, was situated on the boundary between Scarisbrick and Halsall, just to the north of the B5243 road bridge. The station was in operation between 1907 and 1938, and the line itself closed in 1952.[4]