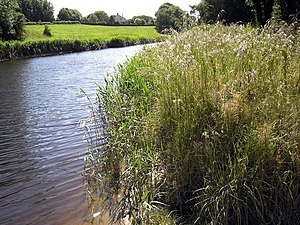 The River Bladnoch near the distillery

The Bladnoch is a river in Wigtownshire in the Machars in the south of that shire. It flows immediately to the south of the county town, Wigtown, and enters Wigtown Bay across the Wigtown Sands, where the River Cree enters the bay.

One of the earliest descriptions of the river is given by Sir Andrew Agnew of Lochnaw and Sir David Dunbar in an appendix to Andrew Symson's work "A Large Description of Galloway" written in the 17th century.[1] In this they state that:

Blaidzenoch which floweth from the mountnous parts of Penninghame, and runs from the north to the south. It runneth through Lochmabary, (wherein there is ane little isle, with ane house upon it) and by the way it receaveth into several waters; the most considerable is the water of Tarfe, which hath its rise from Airtfeeld, in the Muirs of Luce, and falleth into Blaidzenoch, under the house of Craighlaw. The Blaidzenoch turns to the east, and after it heth fra its source run twenty miles, it falleth into the Bay of Wigtown, near above the place of Baldone. 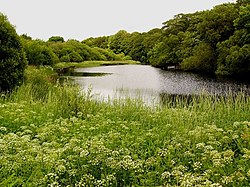 The river Bladnoch rises at Loch Maberry in the parish of Kirkcowan, through which it runs south to Polbae. On its journey south it is joined by Reoch Burn as it passes through Carseriggan Moor. Continuing its journey it passes Isle-na-Gower and becomes a border between the afforested land at Hopeless Howe and the Ring of Barfad. Shortly after this it is met and joined by Black Burn. At this point the river is bordered on its east side by Barnley Plantation. Crossing the river at the stepping stones is a single-track road which links Mark of Shennanton with Little Eldrig. Shortly after this point the river widens briefly at Broad Wheel. Continuing on its journey southwards it is next forded by Shennanton Bridge where the A75 crosses it. Next we come to Linn Wood and the waterfall at Linn of Barhoise. The river then moves on past Barhoise Farm to Barhoise Mill. In 1684 according to Symson, this area had a salmon fishery with nets on both the Bladnoch and the Tarff. At the Mill of Barhoise, the Laird of Craichlaw had fishing rights. Barhoise Mill is a T-shaped two storey construction of granite, whinstone and slate, which is falling into a dilapidated state. The mill was driven by a wheel which was situated at the side of the building. Of this wheel only the wooden axle remains. The datestone above the door reads 1827, but this mill is most certainly a reconstruction of a much earlier one, perhaps connected with the Old Place of Glaisnick, a one-time nearby residence of the powerful Gordon family of Craichlaw. The main road from Kirkcowan to Wigtown and from Kirkcowan to Minnigaff via Glaisnick crossed the river just south of this mill. There are still stepping stones at the fording place east of Ring Farm.

Due east of Kirkcowan the Bladnoch unites with the Tarf Water. Two miles below this point the Laird of Grainge had fishing rights "beneath which, at severall places the said river, the Laird of Dereagill, on Kirkinner side, and the Laird of Torhouse, on Wigtown side, have severall places where they take salmon by nets, both which Lairds have an equal interest therein; and some yeares again, they fish together, and divide their fish equally."

In the reign of King David I (1124–1153) the Order of Knights Templar (established in 1118) was introduced into Galloway. The knights operated Inns of Hospitality as one of their activities, and one of the inns was situated beside the Spittal of Bladnoch, the crossing place on the main road from Wigtown to Portpatrick and Ireland.

About one mile south of Dalreagle, in the parish of Kirkinner, the Water of Malzie empties itself into the Bladnoch. Soon after this the river comes to Torhouse Mill, one of the early mills which, incorporating a farm steading, ground corn. The wheelpit and lade, part of the 19th century mill which was powered by the river, can still be traced. Very near this on the riverside is the ruined site of a waulkmill which was a wool manufactory. By 1792 it employed 40 workers making "plaiding and flannel" for export to the towns of the south.

A weir below this is just south of the site of a farina mill, Newmilns, two miles west of Wigtown. This was a small T-shaped mill of three storeys, built into the river bank. The building has been completely gutted and is now made use of as a store and byre. The wheelpit is at the rear of the mill, and the remains of a breastshot wheel with wooden axle and cast iron rims can be seen. The wheel had a diameter of 16 feet and was 5 feet wide. The only present industry on the mill section of the river is a modern trout farm on the site of the former Torhouse grain mill. It was opened in the 1970s.

Past these mills the river runs through Cotland and Kirwaugh Plantations. The scenery at this point is described by Samuel Robinson as being the finest along the fifteen-mile extent of the river's course. After all these plantations the river descends to a large pool called Linghoor, which has been known since the 18th century as one of Scotland's finest salmon pools.

The Bladnoch Distillery stands on the river, established in 1817. The distillery sits on the North side of the river, just west of Bladnoch village. In 1798 this village consisted of 10 or 12 thatched houses on both sides of the road from Wigtown to the ford of the river. The inhabitants of the houses of that period were all labourers. The old ford has been unnecessary since the construction of the first bridge, near the distillery site, in 1728. In the 15th century a charter shows a request from Margaret, Countess of Galloway, for Papal Indulgences to be granted to any who would help in the building of a stone bridge across the Bladnoch. This was to help pilgrims on their way to Whithorn, as the existing wooden bridge was continually being swept away in floods. The bridge was not built until almost two hundred years after pilgrimages had finally ceased to take place.

At the south side of the 1728 stone bridge there was a public house which was known for its heavy drinking, rowdy behaviour, and fights. In 1743 the old innkeeper at "Blednoch Brig" was a man called Sawners McClurg. He allowed any kind of rowdy behaviour but fighting in his establishment. If a fight began "he reached for a thick stick which he kept handy, stood up, gave the ground a thump with his stick and said "Quietness is best". He was a strong man and, when he did this, everything was silent. A poem was carved on his gravestone:

Beneath lies Sawners McClurg
Enjoying his quiet rest
When he was alive he ay said
"Quietness was best". 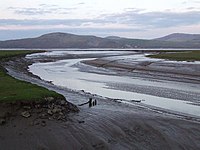 The river on Wigtown Sands

When the new bridge of 1867 was built the old stone bridge lay derelict. The new bridge was first discussed, according to the Free Press, in 1850. In 1867 the paper issued the news of its completion, and in 1868 carried an article reporting the costs of the finished work. The stones of the old bridge were eventually used by 1875 to construct a viaduct for the railway over the river to the east of the village.

By 1877 Bladnoch was a large village consisting of one and two storey neat slated houses, all of which had been built since the start of the 19th century. Industries in the village were McClelland's Distillery and McClelland's Preserved Potato Manufactory and Farina Mill. George McClelland, brother of Thomas and John McClelland who founded the distillery in 1817, founded the Starch Manufactory, Potato Mill or Farina Mill at Potato Mill road later. In 1842 it was described as being immediately south of Fordbank House, nearly half-a-mile north of Bladnoch Village. It was a considerable building of two stories high and built of stone, forty persons getting constant work there. At that time the factory and Fordbank House were the property of Charles McClelland. Fordbank was described as "a house of two stories high and built of stone." There were nearby small outhouses and pleasure grounds. In 1841 the works were described as "a Farina Mill with extensive chemical works where a large number of men and women were employed in day and night shifts of work." The Mill operated from the mid 19th century until after World War I. The ground on which it stood was on lease from the Burgh of Wigtown, and when the mill closed the land reverted to the Burgh and was sold for private building. In the Statistical Account of 1965 the Potato Mill is mentioned as having been demolished, and this being the cause for the drop in potato production in the parish. The last McClelland belonging to the Potato Mill was George McClelland who owned Orchardton House in Wigtown.

In 1877 there were many businesses in Bladnoch. There was a small coach building establishment run by Mr Withers, at which small or the largest coaches could be made at short notice. There was a large iron foundry owned by Mr William Anderson, a ship owner who had vessels trading to Glasgow and England. At his foundry all sizes of iron castings could be produced, again at short notice. This foundry (which stood near the present garage in Bladnoch) built boats which were put into the river at the site of the old ford, on the brae. Another Bladnoch ship owner was Mr Robert Bennett, proprietor of a large bakery in the village. He had a vessel which traded between Wigtown and Whithorn. McClumpha's drapery and tailoring establishment, run by father and son, made fashionable and substantial gentlemen's clothing. There was also Mr George Paton's joiner and cartwright's shop, a post office, three grocers' shops, two public houses, and a beautiful bowling green which had been gifted to the village by the Earl of Galloway. At this time transport consisted of two coaches daily travelling from Newton Stewart to Whithorn and vice versa.

The Friars from the Dominican monastery in Wigtown (founded by Devorgilla) had been granted fishing rights on the south side of the Bladnoch, and in 1526 James V gave them those on the north side in a thirteen-year lease. This lease was later turned into a gift. On the site of these fishing rights stood the town's grain mill. In or before 1471 the mill was destroyed by a flood, and it was not repaired until 1500.

In later years fishing rights became property of the Earl of Galloway. He owned the fishing rights for the whole river from its mouth to Torhouse for salmon fishing. In dry years, from ancient times, no salmon were able to swim higher than Torhouse. The 1791 Statistical Account states that rents for salmon fishing had successively risen from £9 to £16, from £16 to £24, and from £24 to £33. The salmon were not large and were taken from the beginning of March to the beginning of October. The best were taken from the river in June and July. As soon as they were caught they were sold, prices falling from 4d per lb to 3d later in the year.

There were several instances in ancient times of whales swimming up the river from the bay. In 1674 a large whale came up the river and was killed on the sands. It was a year of terrible famine and all the people nearby went to get pieces of whale meat. Oil from the whale was very good and was used to burn in oil lamps.

The buildings which were formerly part of Bladnoch Creamery stand on the south side of the river near the old ford. From this place the river flows in several wide curves until it passes Wigtown harbour. From there it flows into Wigtown Bay.