Sgùrr nan Conbhairean is a mountain in the Glen Shiel Hills, the district packed with high hills where Ross-shire and Inverness-shire meet near the west coast. Sgùrr nan Conbhairean itself stands on the border of the two shires, and reaches a height of 3,638 feet at its summit, and so it qualifies as a Munro. Its name means "Peak of the hound keeper".

The mountain stands on the north side of Glen Shiel, toward the eastern end of the North Glen Shiel ridge, north of Loch Cluanie. Four craggy ridges meet at its summit, three leading to fellow Munros:

The south ridge leads down towards the loch. 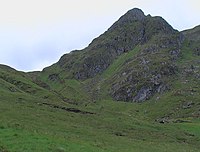