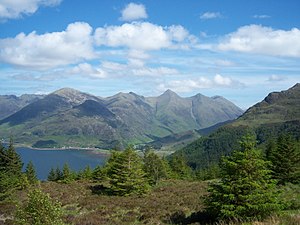 The Five Sisters of Kintail 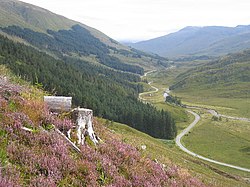 The upper end of the glen

The Glen Shiel Hills form much of the western boundary of Inverness-shire with Ross-shire, standing either side of Glen Shiel in the Highlands. High, wild and remote, the hills are physically in two parts; the South Shiel Ridge and the North Glenshiel Hills, amongst which are the famous Five Sisters of Kintail. These two areas, north and south, are parted by Glen Shiel (in which runs the River Shiel) and, just across the watershed, Loch Cluanie.

The county border loops around the glen following the main ridges of the hills, north and south, so that the banks of the River Shiel and of Loch Duich are all in Ross-shire, but Inverness-shire encompasses the glen from the mountain tops.

The Glen Shiel Hills contain amongst them 21 Munros, distinct mountains over 3,000 feet: 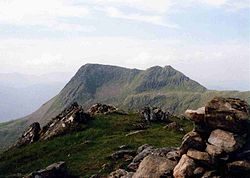 The long South Shiel Ridge allows a fit fellwalker to achieve 8 Munros in a day. The ridge runs east–west, linking the Munros upon it with relatively little drop between them

The ridge is on the south side of Glen Shiel, and can be reached from the A87 road which runs down the glen from Cluanie to Shiel Bridge. To start the South Shiel ridge from the east, follow the old road to Tomdoun. The road is now disused as it was flooded when Loch Loyne was created; from the first summit though if the water level in the loch is very low, the old road bridge over the original River Loyne appears rising from the waters.

The South Shiel ridge also has many spurs running north to the main road and many excellent shorter routes can be made using these ridges.

At the west end of the South Shiel ridge and usually climbed separately the Forcan ridge to the Saddle give some pleasant airy scrambling. 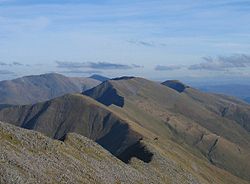 The northern hills are ranged along the north of the glen from Loch Cluanie westward to Loch Duich and the coast, and are again reached from the A87. The west of the range contains the Five Sisters of Kintail, a high ridge of three Munros and two tops, and to the east of these is a series of hills latterly dubbed the Three Brothers. Shiel Bridge is a good starting place for an expedition to these hills, as indeed to the South Shiel Ridge.

Further to the east to the north of the Cluanie Inn, the Munros are grouped on ridges which run north-south with Glen Affric youth hostel at the north end and Camban bothy not far away. The path through the glen to the youth hostel runs through the low bog, and as often as not disappears into it.

Slightly to the north but also accessed from Morvich by way of good paths or from Glen Licht House is the big Munro Beinn Fhada, which can be grouped with A' Ghlas-bheinn for a good day.

The Five Sisters of Kintail

The Five Sisters form a high ridge in the westerm part of the North Glen Shiel Hills, in the district of Kintail overlooking the lower reaches of the River Shiel. They consist of three Munros and two subsidiary summits listed as Munro tops. Many a hillwalker has proudly announced having done Five Sisters all in one day, and they are welcoming of the challenge.

From Shiel Bridge, the frequent starting place, are paths into the hills, or from the other side there is access from Glen Licht, whence a track runs from the campsite at Morvich. (Edinburgh University uses Glen Licht House at the far end of the track as a climbing hut from where the brothers are best climbed.)