Sgùrr a' Bhealaich Dheirg is part of a group of three Munros forming the North Glen Shiel Ridge, along with Aonach Meadhoin and Sàileag; these are also known as the "Brothers of Kintail" in contrast to the Five Sisters of Kintail which lie just to the west. Sgùrr a' Bhealaich Dheirg is the highest of the three Brothers with a height of 3,399 feet.

The mountain's name is Gaelic, from "Peak of the Red Pass"; the identification of the "red pass" (Bhealaich Dheirg) is unknown though as the name appears on no map for any bealach hereabouts. 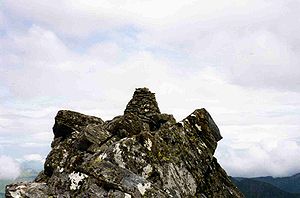 Approaching the summit cairn along the narrow ridge.

Sgùrr a' Bhealaich Dheirg is similar to the other Munros on the northern side of Glen Shiel in that it has extremely steep grassy slopes which descend into Glen Shiel, while to the north there are craggy coire]]s and ridges. The southern flank of the mountain descends 2,790 feet in a mile and a half to the valley floor: this steepness deters direct ascents of the mountain from the A87 road in the glen. There are also steep grassy slopes to the east which descend to Coire nan Eun.

The mountain is made up of four ridges. The main east - west ridge links with the adjoining Munros of Sàileag (west) and Aonach Meadhoin (east). There are two ridges which go northerly (north and north-east) from the summit plateau and descend into the isolated country of the Kintail Forest.

Sgùrr a' Bhealaich Dheirg stands on the main east-west watershed, so that drainage on each side flows to opposite coasts, to the North Sea and to the Atlantic Ocean. The mountain has the distinction of having two sizable rivers rising from its northern corries; the River Croe emerges from a small lochan called Loch a Glas Choire (within the Glas Choire) and flows north=west for 7½ miles to join the sea at Loch Duich on the west coast. The River Affric rises in Coire nan Eun on the eastern flank of the mountain and flows some 50 miles to reach the east coast in the Beauly Firth.

The steep southern slopes of the mountain are clothed in the trees of the Glenshiel Forest below the 450m contour.

A direct ascent is not advisable given the steepness of the southern slopes. However it can be attempted from a starting point a mile and a half west of the Cluanie Inn, going through the forest and ascending by a subsidiary ridge called Meall a' Charra which joins the eastern ridge at the col with Aonach Meadhoin.

Most of those who achieve the summit come along either the east or west ridges from the adjoining "Brothers" Munros. This traverse of all three mountains, Sàileag, Sgùrr a' Bhealaich Dheirg and Aonach Meadhoin starts either at the Cluanie Inn to the east of the group, or from a parking place in Glen Shiel (at grid reference NH009135) to the west. The starting and finishing point of this walk is several miles apart.

The Summit of Sgùrr a' Bhealaich Dheirg can come as a surprise to the walker with the highest point situated off the main summit plateau, 90 yards along the narrow northeast ridge with a dry stone wall leading to it. It is an easy scramble to reach the well built summit cairn which commands good views of the mountainous country to the north.