Sgurr na Ciste Duibhe is a mountain amongst the Glen Shiel Hills where Ross-shire and Inverness-shire meet near the west coast. Sgurr na Ciste Duibhe itself stands in Ross-shire and reaches a height of 3,369 feet at its summit and accordingly it is listed as a Munro. It stands on the northern side of Glen Shiel, 17 miles south-east of Kyle of Lochalsh.

Sgùrr na Ciste Duibhe reaches a height of 3,369 feet, making it Munro number 104 in terms of height.[1] It is one of three Munros which make up the Five Sisters of Kintail group of peaks, with Sgùrr Fhuaran and Sgùrr na Càrnach and two subsidiary tops, and it is often climbed as part of the walk which takes in the full Five Sisters ridge. The ridge is a renowned spectacle, though Sgurr na Ciste Duibhe itself is not particularly photogenic and it is difficult to get a good impression of it from the A87 road because of the steepness of its slopes as they fall into Glen Shiel.

The hill's Gaelic name translates as the "Peak of the Black Chest" or "Peak of the Coffin". The meaning of the name is unsure but it is thought to refer to an unusual deep rocky hollow near the summit which lies between the main ridge and a false crest. This can be dangerous in mist or snow conditions.[2] Other sources say that the name refers to the deep hollow of the Allt Dearg on the hills south-west slope.[3] The mountain should not be confused with another Munro called Ciste Dhubh which lies just 4 miles to the east. 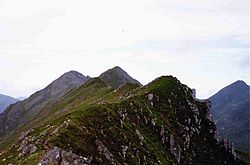 Sgùrr na Ciste Duibhe's south face is one of the steepest and highest grassy mountainsides in the Highlands as it drops 3,000 feet in a distance of a mile to the valley bottom in Glen Shiel. The average angle of this hillside is 34 degrees, with a maximum of around 40 degrees. The mountain's northern flank falls in crags into a corrie named Coire Domhain ("Deep Corrie") while to the west a ridge connects to the adjoining Munro of Sgùrr na Carnach. The ridge continues to the east going down to the Bealach an Lapain ("The Easy Pass") before climbing to the adjacent Munro, Sàileag.

There is one subsidiary top with "Munro top" status:

Sgùrr na Ciste Duibhe's subsidiary peak is listed in the Munros Tables as Sgùrr nan Spainteach, which means "Peak of the Spaniards" and is found some 650 yards east of the main summit. The peak's unusual name derives from the Battle of Glen Shiel which took place on the southern slopes of the mountain in 1719, when 300 Spanish soldiers fought a desperate rearguard action in the battle on the side of the defeated Jacobite rebels, and the peak was named by locals in memory of their involvement.[4] The western flank of Sgùrr nan Spainteach has an unexpected 30-foot vertical drop as the walker traverses the ridge to the main summit and requires some awkward scrambling.

The steep south west slopes of Sgùrr na Ciste Duibhe have a large boulder lying on them known as "Prince Charlie's Stone"; this is said to be where Bonnie Prince Charlie, the Young Pretender, spent a red hot day in the summer of 1746 hiding from government troops. At the time he had a £30,000 bounty on his head after fleeing after the Battle of Culloden.[5]

The direct ascent of Sgùrr na Ciste Duibhe begins at a parking place at (NH009135) on the A87 main road in Glen Shiel. It is a steep ascent up the hillside to the Bealach an Lapain, where the eastern ridge of the mountain is then followed to the summit. This walk can be continued north west to take in the other peaks of the Five Sisters ridge, finishing 5 miles from the starting point on the shores of Loch Duich.[6] The summit is marked by a large cairn and gives extensive views.