Mam Sodhail is a mountain on the border of Ross-shire with Inverness-shire, which reaches a height of 3,875 feet at its summit, and so it qualifies as a Munro. It stands in the secluded country on the northern side of Glen Affric, some 19 miles east of Kyle of Lochalsh.

At 3,875 feet, Mam Sodhail is the second highest mountain north of the Great Glen (after neighbouring Càrn Eige) and the fourteenth-highest in the United Kingdom. Càrn Eige stands less than a mile to the north of Mam Sodhail and the two are regarded as twin mountains being roughly identical in height and appearance. They stand together above Gleann nam Fiadh ("Glen of the Deer") and are linked by a high col of around 3,248 ft, making the traverse of the two mountains a natural day's walk.

Mam Sodhail's name is Gaelic, and translated means "Hill of the Barns", although other sources give it as "Breast of the Barns", from its delightful shape. It has the alternative English name Mam Soul, by which it appeared in the early Munro's Tables.

Mam Sodhail is mostly grassy without too much rock, however its sheer size along with its long ridges and fine corries together with its four subsidiary tops named in the Munro Tables make it a first-rate mountain.

The mountain's four subsidiary summits listed as "Munro Tops" are: 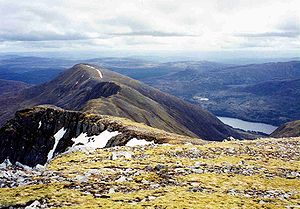 Looking down the long east ridge to the Sgurr na Lapaich

The hill casts three ridges down towards Glen Affric, the most impressive of these is the east south-east ridge which has two "tops" on it, Mullach Cadha Rainich stands at the midpoint of the ridge which runs for 2½ miles to conclude at the other top, Sgurr na Lapaich, which is the most prominent part of the mountain when viewed from Glen Affric; Sgurr na Lapaich has the characteristics of a separate mountain and was regarded as a Munro in the original 1891 list, and Irvine Butterfield has said, "The peak certainly does not lack character and many were disappointed to find that its original status was not restored in the seventh edition of Munros Tables".[1]

The other two ridges which form a horseshoe around the Allt Coulavie valley to the south of the summit carry the topsof An Tudair and Creag Coire nan Each.[2][3]

The mountain's western flanks fall away towards Gleann a' Choilich which drains northwards into Loch Mullardoch.

Mam Sodhail was an important part of the Ordnance Survey's initial mapping of the northern Highlands in the 1840s and the summit carries a massive cairn which was used by the surveyors in their work. The cairn is hollow and its walls have to be climbed to get inside,[4] unusually there is a visitors book inside the cairn.[5] A few feet below the summit is the remains of a small bothy, complete with walls, fireplace and chimney which was formerly used by deerstalkers and watchers to keep sheep and walkers off the mountain. The bothy was mentioned by Sir Hugh Munro in volume one of the Scottish Mountaineering Club Journal along with tips to circumvent it and its inhabitants.[6]

There is evidence of some quarrying south-west of the main summit on the ridge to Creag Coire nan Each. There are a number of pits about ten feet deep and several yards across and it is probable that this was the source of the stone for the summit cairn and the bothy.[7]

The ascent of Mam Sodhail starts at the car park at the road end in Glen Affric at grid reference NH200233 the walker can either ascend by a stalkers path up Coire Leachavie or by climbing Sgurr na Lapaich first and then following the long ESE ridge to the top of the mountain. The view from the top takes in the impressive sights of Sgurr nan Ceathreamhnan and Càrn Eige close by and the distant view is crowded by the mountains of the north-west Highlands. Most walkers will take in the nearby Carn Eige as part of the walk and strong walkers may take the opportunity to climb the remote Munro of Beinn Fhionnlaidh, which lies two miles to the north and is difficult to access from any other place.