From Wikishire
(Redirected from River Affric)
Jump to: navigation, search 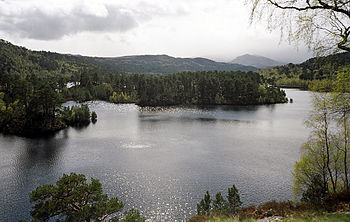 Glen Affric is the glen of the River Affric in Inverness-shire. It is a beauteous Highland glen, reached southwest of the village of Cannich, some 15 miles to the west of Loch Ness. The River Affric runs along its length, passing through Loch Affric and Loch Beinn a' Mheadhoin (Loch Benevean).

The Glen was once part of the lands of the Clan Chisholm. The Battle of Glen Affric took place in 1721.

The area is a Caledonian Forest Reserve, a "National Scenic Area" and a National Nature Reserve. Often described as the most beautiful glen in the Highlands, it contains one of the largest ancient Caledonian pinewoods as well as lochs, moorland and mountains.

Affric Lodge, a mansion built as a hunting lodge, is located on a peninsula in Loch Affric, while a youth hostel is further up the glen at Alltbeithe.

The glen is part of the Affric/Beauly hydroelectric scheme, constructed by the North of Scotland Hydro-Electric Board. Loch Mullardoch, in the neighbouring Glen Cannich, is dammed, and a 3-mile tunnel carries water to Loch Benevean, which has also been dammed. From there, another tunnel takes water to Fasnakyle power station, near Cannich.

The vast acres of mountain and glen by the west end of the glen form the West Affric Estate, belonging to the National Trust for Scotland.

The final track on musician/field recordist Chris Watson's Stepping into the Dark album is entitled "The Forest Path. Meallan Na Ceardaich, Glen Affric, Scotland" and was recorded in Glen Affric.