Black Down or Blackdown is the highest hill in Sussex, at 919 feet, and is second only to Leith Hill (965 feet) in south-eastern England. The hill is in northern Sussex, its dip slope on the north side running down to the border of Surrey.

Black Down in the Weald, the hills which rise up between the North Downs and South Downs in Surrey and Sussex but has been allocated as within the South Downs National Park, of which it is the highest point. The pine and heather-covered slopes are owned by the National Trust, and are a favourite walking spot.

There are no villages on Blackdown, but Fernhurst is just to the south-west, and Lurgashall to the south-east. 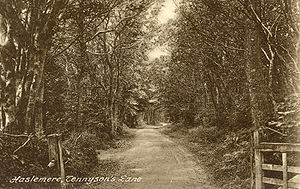 View from two miles away

The great black mass of Blackdown looms over much of the Low Weald of Sussex. Geologically the hill is part of the Greensand Ridge and lies on the western margins of the Weald. Blackdown is to be found about a mile and a half south of Haslemere, and its northern dip slope trespasses into Surrey.

There are National Trust car parks on Tennyson's Lane, which runs up Haste Hill from Haslemere, and a footpath from the town centre. It is also possible to walk to Blackdown from Lurgashall, although this means walking up the steep southern escarpment. Blackdown is crossed by the Sussex Border Path and The Serpent Trail.

The secluded sunken lane that runs from Haslemere past Aldworth is named Tennyson's Lane in memory of the poet. It is little changed from Arthur Paterson's description in 1905:

Trees meet overhead, copsewood surrounds it, and later, it is hedged by high sandy banks thickly overgrown with plant and scrub; squirrels and rabbits, and all other small woodland creatures, disport themselves over it. It twists and turns, and to the stranger appears to lead nowhere in particular. 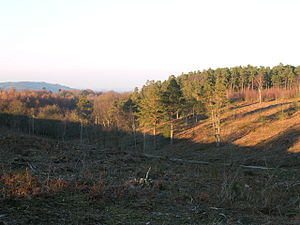 The acid sandstone of Blackdown limits the range of plants. Until the beginning of the 20th century, Blackdown was a grazed common where trees were kept down by sheep, and heather dominated. After the end of regular grazing Scots Pine became the dominant species. The National Trust now carries out a programme of tree-felling and controlled burning to maintain and regenerate areas of open heath. The reserve has been fenced so that conservation grazing with cattle can be used as a management tool. Blackdown is an important habitat for insects and birds.

A geological relief model of Blackdown, and much information on its natural history, can be found in the Haslemere Educational Museum.

Although common land, Blackdown was the property of various landowners until W E Hunter donated it to the National Trust in 1948, as a memorial to his wife. The Hunters are remembered by an inscribed stone seat at the Temple of the Winds. Flint artefacts show there has been settlement on Blackdown since the mesolithic period, around 6000 BC.

As well as Aldworth House (just visible from the footpath leading down to Roundhurst) and Foxholes (which together formed the estate of Alfred Lord Tennyson), a number of other interesting private houses will be passed by walkers. These include Blackdown House, to the west, surrounded by daffodils in the spring, and Old Manor Farm (previously Upper Roundhurst Farm) on Tennyson's Lane.

Because of its elevation, from 1796 to 1816 Blackdown hosted a station in the shutter telegraph chain which connected the Admiralty in London to its naval ships in Portsmouth.

Aside from its height and its wild beauty, Blackdown is best known as the site of the poet's house, Aldworth. Keen to escape the summer 'trippers' who came to his Isle of Wight home, Faringford, Tennyson purchased Blackdown, and built Aldworth in 1869. The French-style Gothic house was designed by Sir James Knowles and is built of local sandstone. It stands on a ridge overlooking the Weald, with magnificent views. Lord Tennyson used Aldworth as his summer residence, taking long walks over Blackdown. He died in the house on 6 October 1892.

Helen Allingham was a frequent visitor to Aldworth in Tennyson's time, and her charming illustrations to The homes of Tennyson vividly capture the landscape of Blackdown.

Despite some air noise from high-flying aeroplanes climbing westwards from Gatwick, Blackdown is an exceptionally tranquil, wild and beautiful place. There are superb views over the Weald from the Temple of the Winds, at the southern end of Blackdown. The English Channel can be seen on a clear day through the River Arun gap in the South Downs. The dry, sandy paths of Blackdown are ideal for children. In the autumn bilberries and blackberries can be picked.

In November 1967 a passenger jet bound for London's Heathrow Airport crashed into the southern slopes of Blackdown, resulting in the death of all 30 passengers and 7 crew on board.

At about 10.02 pm on Saturday, 4 November 1967, a Caravelle Airliner No. EC-BDD, owned by Iberia Airlines of Spain, crashed; the aircraft was on a scheduled flight from Malaga, Spain, to Heathrow Airport, and was piloted by Captain Hernando Maura. It then broke through a large hedge and parts of the aircraft fell off destroying a garage, and damaging parts of the roof of Upper Black Down House as the aircraft disintegrated.

The victims on the scheduled flight, Iberia 062, were the all-Spanish crew, and the passengers comprising 25 Britons, most returning from holiday in Spain, as well as two Australians, two Americans and two Spaniards.