Altarnun is a village in Cornwall, standing on the north-eastern edge of Bodmin Moor.

The parish of Altarnun includes the village of Fivelanes and the hamlets of Bolventor, Treween and Trewint, which all together had a population of 976 according to the 2001 census, which had increased to 1,084 according to the 2011 census. Other hamlets in the parish are Bowithick, Palmersbridge, South Carne, Tolborough, Lower Tregunnon, and Tredaule.[1] The area of the parish is of 15,018 acres; the largest in Cornwall.[2]

The moorland area of the parish is large and lies west of the village towards Rough Tor and southwards towards Dozmary Pool. There is a large conifer plantation at Wilsey Down Forest (Halvana Plantation). The village is in the valley of the Penpont Water and the parish is divided by the A30 trunk road which passes through Fivelanes which was once an important stopping place for stage coaches.

As the largest parish church on Bodmin Moor, the Church of St Nonna is known as the Cathedral of the Moor. It was built largely in the 15th century in the Perpendicular style, with its bell tower standing 109 feet high. It is notable for a fine Norman font and old woodwork, including the screen, bench-ends and communion rails which date to 1684. The screen is one of the finest 15th century examples in Cornwall; it has three gates and the cornice of vines and tracery and vaulting are finely carved.[4]

John Wesley often visited Trewint, lodging in Digory Isbell's home which is now a museum of Wesley and Methodism. (The former Wesleyan chapel of Altarnun has the head of Wesley carved over the doorway by Neville Northey Burnard. This was done when Burnard was aged sixteen years and lived next door.)[5][6]

In literature and culture

Altarnun features in the novel Jamaica Inn by Daphne du Maurier set in the parish's former coaching house, Jamaica Inn at Bolventor. The Vicar of Altarnun is a major character in the novel.

The village was also the birthplace of sculptor Neville Northey Burnard (1818–1878). It was surveyed for the Survey of English Dialects. 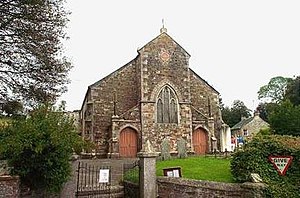