St Germans is a village in eastern Cornwall. It stands on the St Germans River or Lynher River, a broad creek leading to the Tamar Estuary. The village takes its name from the St German's Priory generally associated with St Germanus of Auxerre, although W M M Picken theorises the church was initially associated with a local saint, but was gradually replaced by the 14th century. This magnificent and ancient Norman church is adjacent to the Port Eliot estate of the present Earl of St Germans. The other villages in the historic parish were Tideford, Hessenford, Minard Cross, Polbathick, and Bethany but new ecclesiastical parishes were established in 1834 (Hessenford) and 1852 (Tideford).

Until the Reform Act the village was, notwithstanding its diminutive size, a borough with a right to elect two members to the House of Commons. It was considered one of the rotten boroughs, one of several in Cornwall. The Reform Act 1832 abolished this right. As in many of the Cornish rotten boroughs, the franchise in St Germans was restricted to a tiny number of "freemen", rather than to all residents, but even they were not numerous—by the time of the Reform Bill, the male population of the borough was only 247. However, the previous census had shown that the whole parish (of which the borough made up only a fraction) had a population of 2,404, and the initial proposal was that St Germans should lose only one of its two MPs; but the Whig government subsequently decided that the availability of sufficient population in a surrounding parish should not save a borough from disfranchisement unless a substantial part of that population was already within the borough boundaries, amending the bill's schedules so as to extinguish both of the St Germans MPs. The Tory opposition attacked the decision as politically motivated (St Germans was a Tory borough), and the vote in the Commons was one of the narrowest in the entire Reform Bill debates.

The seal of the borough of St Germans was St German seated on a throne, with the legend "S. Prepositure Sci Germani in laya".[1]

St Germans was originally the seat of the Bishop of Cornwall before the see was combined with that of Crediton in 1042. Today the Bishop of Truro's assistant (suffragan) bishop is known as the Bishop of St Germans in acknowledgement of this, although he has no specific links with the village. The first of these bishops was appointed in 1905.

John of Cornwall was a Christian scholar and teacher, who was living in Paris about 1176. Little is known of his life. From his names, it is surmised that he was a native of St Germans. 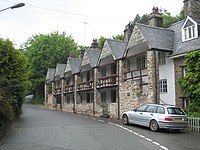 Sir William Moyle's Almshouses also known as The Galleries date from 1583. They are unusual in that they consisted of six one-room apartments on the ground floor and a further six on the first floor. The upper rooms open onto a gallery along the front of the range, which is reached by stairs at either end. The almshouses were converted into four separate dwellings in the 20th century; it is a Grade II* Listed Building[2]

It was originally a busy fishing village in the 19th century. The St Germans Quay was busy in the last century with cargoes of timber, coal and limestone. Until the last war the trade in roadstone continued. Now St Germans Quay is home to the village sailing club; the Quay Sailing Club (QSC). The sailing club is now well established and plays a part in the life of the village.

St Germans railway station was opened on 4 May 1859 at the west end of St Germans viaduct, 106 feet above the quay. It is notable for having the best preserved Cornwall Railway station buildings.

There are references in St Germans to a fair in 1284, as well as a second fair on Lammas Day. A rental of landrake manor made in 1652 says ‘there was a Fayre keept yeerely within the Towne of St Germans upon the Last Tursday in Maye’ but notes that the fair has decayed and ended under Cromwells Government. However the fair was revived shortly after the restoration, and there are multiple references to it from then on. Indeed, it is listed annually in local newspapers until the late 1950s, with the date of the fair held on the nearest possible day to the 28th of may.

Robert Hunt in ‘Popular Romances of the west of England’ Describes a two day festival, that took place on the 28th and 29th of May: On the 28th of may a 'mock mayor' was chosen with 'with many formalities, remarkable only for their rude and rough nature' and cattle were brought into the village for the fair. On the 29th the mock mayor who had been 'supping too freely of the fair ale' was pulled around on a cart to claim his pretend jurisdiction... On this day anyone entering the village without the leaf or branch of an oak leaf in his hat was thrown in the trough of water fed by a stream on nut tree Hill.

On 27 May 2012 the Fair was revived. A new "mock mayor" was elected and a symbolic may tree was paraded through the village.