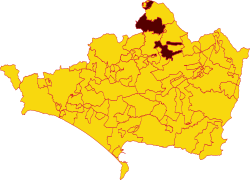 Redlane is a hundred in Dorset, situated in the north of the county, adjacent to the borders with Somerset and Wiltshire. It is bounded by Gillingham Liberty to the north; by Somerset to the west; by Buckland and Sturminster Newton Castle to the south; and by Sixpenny Handley to the east. The northernmost detached part also borders Wiltshire. It had a population of 4,474 in 2011.