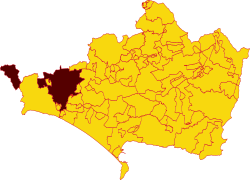 Beaminster and Redhone is a hundred in Dorset, situated in the west of the county, adjacent to the borders with Devon and Somerset. It is bounded by Whitchurch Canonicorum Hundred to the south-west; by Devon to the west; by Somerset to the north; by Tollerford to the north-east; and by Eggerton and Godderthorne to the south-east. It had a population of 14,656 in 2011.

Additionally, Bridport is locally situate in the hundred, although usually accounted for separately.