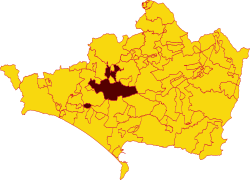 Cerne, Totcombe and Modbury is a hundred in Dorset, situated in the centre of the county. It is bounded by Tollerford to the west; by Yetminster to the north-west; by Buckland and Sturminster Newton Castle to the north; by Whiteway to the east; by Puddletown to the south-east; and by George and Godderthorne to the south. It had a population of 2,684 in 2011.