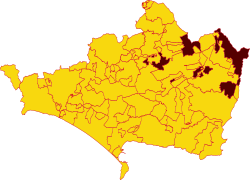 Cranborne Hundred is a hundred in the county of Dorset, situated in the north-east of the county, adjacent to the borders with Hampshire and Wiltshire. It is bounded by Hampshire to the west; by Wiltshire to the north; by Sixpenny Handley to the north-west; and by Knowlton and Badbury Hundreds to the west. As well as the main portion in the north-east, it also comprises several pieces spread throughout the north of the county. It had a population of 42,720 in 2011.