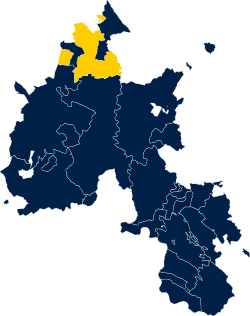 Bloxham Hundred is one of the hundreds of Oxfordshire, named after the village of Bloxham, which it contains. It is situated in the north of the county, bounded to the north-west by Warwickshire; to the north-east by Banbury Hundred; to the east by Northamptonshire; to the south by Wootton Hundred; and to the south-west by Chadlington Hundred. It had a population of 22,623 in 2011.

Additionally, the parish of Shenington, a detached part of Gloucestershire, is locally situated in Bloxham hundred.