Measham is a large village in a detached part of Derbyshire locally situate in Leicestershire, close to the borders with Staffordshire and Warwickshire. It is located just off the A42 road, four and a half miles south of Ashby-de-la-Zouch (the closest town), within the National Forest.[2][3] Its name means the homestead on the River Mease.[4]

The village's name Meas-Ham, meaning a settlement on the River Mease, suggests the village was founded in the Saxon period between AD 350-1000.[5]

Immediately preceding the Norman Conquest of 1066, the village belonged to "Earl Algar". In the Domesday Book of 1086 the village is recorded as belonging directly to the King, as part of a Royal Estate centred on Repton.[6][7] The village was assessed as having a taxable value of 2 geld units (quite small), and as containing land for 3 ploughs, 20 acres of meadow, and a square furlong of woodland (10 acres).[6]

The Manor passed from the crown to the Earls of Chester.[8] In 1235 it is recorded as being in the possession of Clementia (Clemence de Fougères), widow of Ranulf de Blondeville, 6th Earl of Chester.[8] Measham Museum state that the manor was in the possession of the De Measham Family who held it until 1308;[9] Given the ownership by the crown and then the Earls of Chester, neither of which actually lived at Measham, it appears the De Measham Family held the manor as feudal tenants, rather than as formal owners; holding the manor, probably, in return for military service.

By the 13th century, the rights to the church appear to have passed to Repton Priory, as in 1272 King Henry III issued a charter to the Priory, confirming their possession of several church and chapelries, including the chapelry at Measham.[10]
The original Chapel of Ease at Measham dated from 1172; however, under the care of Repton, in 1340, the present St Laurence's Church was built.[9]

On 24 March 1311, King Edward II granted two charters to William de Bereford, the Lord of the Manor of Measham, to hold a market and a fair in the village.[11] The charters allowed for a market to be held on a Tuesday, and for an annual three-day fair to be held on the Festival of the Translation of St Thomas the Martyr (7 July).[8][11] By 1817 both the market and fair had died out.[8]
This medieval settlement is thought to have been mainly agricultural, but coal mining is known to have taken place as early as the 13th century, and William De Bereford died getting coal; records from his death showing the village's coal resources were worth 13s. 4d annually.[9]

In 1355, Edmund de Bereford, son of William, died leaving the manor of Measham to 3 heirs: Joan de Ellesfield, John de Maltravers and Margaret de Audley.[8]
During the 15th century, the manor came into the hands of Walter Blount, 1st Baron Mountjoy.[9]
In 1454, the manor was recorded as in the possession of Sir William Babington at the time of his death; and in 1474 it was in the possession of John Babington (presumably his son).[8]

In 1596 the village was dismissed by William Wyrley as "a village belonging to Lord Sheffield, in which are many coal mines, [but] little else worthy of remembrance." It was omitted altogether from Richard Blome's gazetteer of market towns in 1673.

In 1563 the manor belonged to John Sheffield, 2nd Baron Sheffield. However, by 1616 the manor had passed to Sir Francis Anderson, only to pass back to the Sheffield family, being owned by Edmund Sheffield, 2nd Duke of Buckingham and Normanby in 1712.[8] 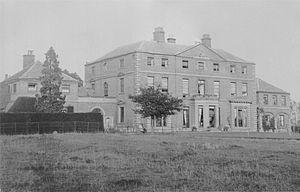 The manor found its way to William Wollaston who sold it to Joseph Wilkes in 1780 for £50,000; after whose death it was purchased by Reverend Thomas Fisher.[8][9] The actual manor house was eventually demolished in the 1960s.[12]
In 1767, William Abney Esq. built an alternative manor house at Measham-Field (North East of the village), which by 1817 had passed to his son, Edward Abney Esq.[8] This was what would become known as Measham Hall, a mid-Georgian seven-bay stately home. The site would, however, become used for coalmining. The Hall subsequently suffered from subsidence and was demolished by the National Coal Board in 1959.[12][13]

By the early 19th century, Measham church was still under the control of Repton; several centuries after the dissolution of Repton Priory, the village was by this point "A Parochial Chapelry, within the Parish of Repton".[8] 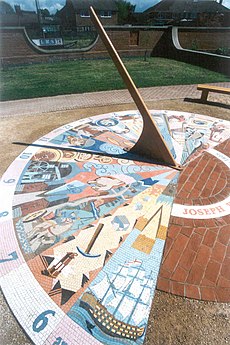 Sundial commemorating Joseph Wilkes, by the artist Steve Field, erected in 2009, near the former railway station

It is around the time of Joseph Wilkes that Measham saw a prosperous period as part of the Industrial revolution; a period of growth that would last into the 20th century.[9] The Ashby Canal passed through the village, opening at the beginning of the 19th century. The Ashby and Nuneaton Joint Railway followed suit, opening towards the end of the century. The village was also on the main route between Birmingham and Nottingham (later known as the A453). The village became a hub of local industry, famous for its brickwork and Joseph Wilkes "Jumb Bricks" (made larger to avoid paying taxes).[9] Other village industry included banking, breweries, coalmines and brick-making (with the village having its own clay pits), a tram way, and boot, lace, cotton, carding and bleach mills.[9][12]

A market hall was said to have been built by Joseph Wilkes around the turn of the 19th century but by 1817 the market had ceased to operate, with the market-house being converted into a dwelling.[8] This later became known as Cross House: 58 High Street; the area to the rear on Queen Street, now used as car parking, is the original market place.[12]

The village's Baptist chapel was built in 1811; "although the Baptist Ministry had been active in the village since the 1730's." A Temperance Hall was built in 1852; now the Age Concern building.[8]

In 1839 the village received an official visit from Queen Adelaide, who in her widowhood, frequently visited the local area; staying at nearby Gopsall Park, home of her previous Lord Chamberlain, The Earl of Howe. Following her visit, Queen Street was named in her honour.[14] 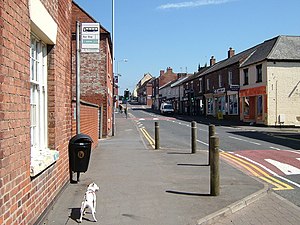 By 1848 the population of the village had swelled to 1,615.[14] A further chapel was constructed for the Methodists, and a Catholic church was built, financed by a local lady aristocrat. 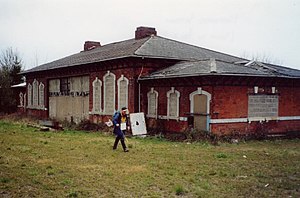 Measham continued to grow, both residentially and industrially, in the 20th and 21st century. Large scale housing estates were constructed, including both council and privately built housing; allowing the population to swell to 4,849 in 2001. Development of the British Car Auctions site at the South-West of the village, following World War Two, prompted further industrial development in the area which has grown to become the Westminster Industrial Estate.[12]

The 20th century also brought periods of sharp decline for the village. Passenger services on the Ashby and Nuneaton Joint Railway stopped in 1931.[15] Freight traffic continued until 1971, after which the line was dismantled.[15] The canal similarly closed in 1957. The traditional industries of the village began to die out, with the boot and shoe factory closing in the 1960s and Measham Colliery closing in 1986.[12] The 1960s saw many of the village's finest buildings demolished, including the Manor House, Measham Hall and the Vicarage.[12]

The village has in recent years seen further development. After many years of neglect, and having fallen into disrepair, Measham's former railway station has recently been renovated to provide a new home for the Measham Museum; The former engine sheds have been developed into industrial workshops, and the former engine yards converted into a millennium garden and public green-space. Both a new library and new leisure centre were also constructed in the village in the last decade. There are also plans to reconstruct the Ashby Canal. Due to housing being constructed along the original route through Measham, the canal will follow the former route of the railway; with a wharf and adjacent visitors centre/shops/cafes planned for the village centre.

The woman of letters Maria Jane Jewsbury was born here in 1800, as were her sister the novelist Geraldine Jewsbury in 1812 and the Astronomer Royal Sir Frank Watson Dyson in 1868. Dyson is noted for his work on solar eclipses and for inventing the six radio time pips.

Measham has a long tradition of pottery manufacture: the area is rich in clay and extraction is recorded as early as the 13th century.[16]
The famous Measham Ware, traditionally associated with the canals and narrow boats, was produced from the last quarter of the 19th century until around 1914 (other sources say 1910).[16] It was not actually produced in Measham but in nearby villages: primarily Church Gresley.[16] It is thought to have acquired the Measham as it was primarily sold by a Mrs. Anne Bonas, from her shop on High Street, Measham.[17]

Measham Ware is earthen ware; It has a dark brown lead glaze with additions in painted white clay: usually flowers and a motto, which was often personalised.[18] Most commonly seen are the teapots, which often have a distinct miniature teapot as a finial on the lid.[19]

The earliest known production was in 1870 by William Mason of Church Gresley; the early price list refers to the pieces as Motto Ware, although it would later also be called Barge Ware due to its association with the canals.[19]

Measham Ware was popular with those on the canals. People passing through Measham on the Ashby Canal would place their order for their personalised teapot as they passed through the village, and collect it when they next traveled through.[20]
Measham Ware also found popularity among the farm labourers of Norfolk and Suffolk who, after collecting the harvest in their own counties, would often travel to Burton Upon Trent to work in the maltings and other industries associated with the breweries. Measham Ware became a popular gift to take home to loved ones.[20]
Local villagers often bought them as a wedding gift; passing them down generation to generation at weddings.[20]

Production of Measham Ware ended around 1910-14. In recent years modern reproductions have, however, been produced.
The Measham Museum contains a large collection of Measham Ware, and the Victoria and Albert Museum in London also have an example on display.[16][18]

A figure prominent in the history of Measham was Joseph Wilkes, an entrepreneur during the early part of the Industrial revolution. Wilkes bought Measham manor from William Wollaston in 1777, and undertook the extensive industrial and agricultural development of the village, many signs of which are still visible today. He used larger bricks (twice the standard size) in much of his architecture in order to reduce the numbers of bricks used, and hence the amount of brick tax payable.[21]

The railway came to Measham 1873 in the guise of the Ashby and Nuneaton Joint Railway: see Battlefield Line Railway (the last existing section of the ANJR) for more details.The old station building has been renovated as part of the Ashby Canal restoration; it currently serves as home to the Measham Museum.[22]