Church Gresley, otherwise Gresley is a village and ancient parish in southern Derbyshire. The village is situated between Castle Gresley and the town of Swadlincote, with which it is contiguous. According to the 2001 census the village had a population of 4,805.

Gresele is recorded in the Domesday Book. Its first element is of uncertain origin, possibly the Old English grēosn meaning gravel and lēah meaning a woodland clearing. Churchegreseleye was first recorded in 1363 and distinguishes it from Castle Gresley.[1] 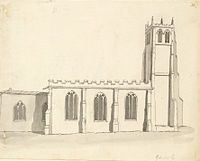 A priory of Augustinian canons was founded at Gresley in the reign of Henry I, by William de Gresley, son of Nigel de Stafford.[2] It was suppressed in 1536 in the Dissolution of the Monasteries.[2]

The Church of England parish church of Saint George and Saint Mary was built early in the 12th century as the priory's conventual church.[3] Of the 12th century building only the lower part of the tower survives.[4] In about 1820 the church and the upper part of the tower were rebuilt.[4] The chancel was designed by A.W. Blomfield and built in 1872.[4] The tower has a ring of six bells, two of which were cast in 1639.[5] 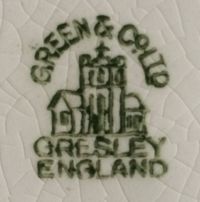 In about 1800 the Mason pottery was founded at Church Gresley. It was renamed Mason Cash in 1901.[6] Mason Cash became a well-known English pottery, producing many kinds of ceramic mixing and baking ware. T.G. (Thomas Goodwin) Green & Co Ltd were founded in 1864 and went on to produce the world famous Cornishware, both companies became part of The Tabletop Group in 2004. T.G. Green went into administration in 2007.

Opposite the park is Gresley Common, the venue for annual bonfire nights until 2003 and the local Scouts. There are many newly planted woods nearby as part of the National Forest.

In the early-2010s, the extensive 'Highgrove' housing development effectively created an entirely new district contiguously north of the village.