Gwyddelwern is a village and parish of 508 residents,[1] situated approximately two miles north of Corwen in Merionethshire. Historically the village was part of the Edeyrnion district of the county. The village straddles the A494 trunk road.

The name is often "poetically", but incorrectly, translated as The Irishman's Alder Grove. Gwyddel being Irishman, wern usually referring to a damp or swampy area arising from run-off from surrounding hills. However, the name is derived from gwyddeli, meaning thickets, hence the correct translation would be alder marsh in the thickets.[2] In colloquial speech the village is often referred to simply as Gwyddel.

The outlook to the west of the village is dominated by the hills of Mynydd-Rhŷd-Ddu and Bryn Gwenallt. To the south the view extends over the Dee Valley to the Berwyn Mountains and Arenig Fawr near Bala.

Besides farm work, local employers include a saw mill in the village and light manufacturing in Corwen and Cynwyd, further south. 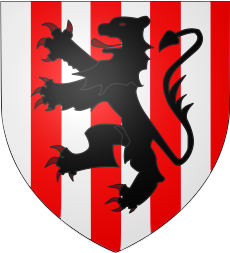 Shield of the Lord of Gwyddelwern

The nearby hamlet of Bryn Saith Marchog (53°02′25″N 03°22′45″W﻿ / ﻿53.04028°N 3.37917°W﻿ / 53.04028; -3.37917﻿ (Bryn Saith Marchog)), features in the story of Branwen, daughter of Llyr, part of the Mabinogion, and is so named after Bendigeidfran (Bran the Blessed), who stationed seven princes or knights there (the Saith Marchog) to watch over his lands while he was away in Ireland. The Lordship of Gwyddelwern was a junior title within the House of Powys Fadog and was recorded in 1400 as being held by Tudur ab Gruffydd Fychan II who was the younger brother of Owain Glyndŵr. Tudur perished in battle during Glyndŵr's war of independence and the title became dormant.

Quarrying was important to the village: the two local quarries being the Dee Clwyd Granite Quarry and Graig Lelo Quarry. There is still activity at Graig Lelo, which plays host to a vehicle breakers and a granite and marble finishing business.

The Coming and Going of the Railways

Gwyddelwern became the first full-operational railway station in the Vale of Edeyrnion, when services started on 22 September 22 1864 with the opening of the Denbigh, Ruthin and Corwen Railway. The station generated much income from the two quarries, which both had their own sidings. The station also had a coal yard, horse loading bay and cattle pens with a weighing machine. There was a freight loop at Gwyddelwern, on the otherwise single track line.

Passenger services ended on 2 February 1953 and goods traffic on 2 December 1957.

Gwyddelwern's historic architecture includes the much-rebuilt high spire of the parish church of St Beuno. The churchyard is circular, an indication of the age of the site, possibly to pre-Christian times.

Which shares a boundary with the local inn - Tŷ Mawr, formerly the Rose and Crown. Parts of Tŷ Mawr date back to the 11th century and, during extensive renovation, a rare jeton or 15th century gaming token was found in one of the wall spaces.