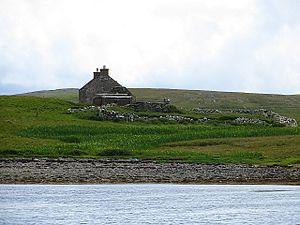 Linga, viewed from the northwest

Linga is a small island of Shetland, lying near Vaila and Walls, the latter on Mainland, Shetland. This is one of several of Shetland's islands named 'Linga'.

Linga is made up of sandstone, subjected to ancient glacial erosion.[2]

Linga lies to the north-east of Vaila, in Vaila Sound surrounded by Mainland, Shetland on three sides. The Holm of Breibister is to the west, the Baa of Linga to the south (baa is a Shetland word for a sunken rock).