Lewes Castle stands at the highest point of Lewes in Sussex, on an artificial mound constructed with chalk blocks. It was originally called Bray Castle.

Today the castle is a local amenity opened to the public as a museum. 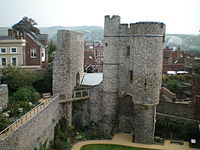 The first fortification on this site was a wooden keep, later converted to stone. It is unusual for a motte and bailey construction in that it has two mottes. It is one of only two such remaining in the country, the other being Lincoln. The Barbican is a particularly fine example of its type.

Lewes Castle was built in 1069 by William de Warenne, 1st Earl of Surrey, the son-in-law of William the Conqueror. William de Warenne and his descendants also had estates and built castles in Reigate, Surrey (Reigate Castle) and in Yorkshire (Sandal Castle and Conisbrough Castle) and Castle Acre, Norfolk . When the last of the Warennes John, the 7th Earl died without issue in 1347, he was buried in Lewes Priory. His title passed to his nephew Richard Fitzalan who was also Earl of Arundel. 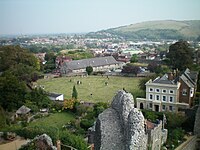 Brack Mount and the bowling green

The Barbican House Museum, a museum of Sussex archaeology, is housed in the castle, as is the Town Model. Barbican House also has a gift shop, bookshop and library for members of the archaeological society.

Various events take place at the castle, including two plays annually, children's parties and weddings. It is a prominent feature of the town, situated close to the High Street and visible from much of the surrounding residential areas.