Rocester is a village and parish in eastern Staffordshire. Its name is spelt Rowcestre in the Domesday Book.

The village is about four miles north of Uttoxeter, and close to the county border with Derbyshire. According to the 2001 census the parish had a population of 1,431. The village lies on a triangle of land between the River Churnet and River Dove, which join to the south. The parish borders, from the south going clockwise, the Staffordshire parishes of Uttoxeter Rural, Croxden, Denstone, Ellastone; and then the Derbyshire parishes of Norbury and Roston, Marston Montgomery and Doveridge.

A Roman fort was founded on the site in about AD 69, as an intermediate point between Derby and Newcastle-under-Lyme. The remains of the earthworks can still be seen. After the Romans departed, in about AD 400, the village remained in use by the Anglo-Saxons throughout the Middle Ages.

In 1141 the St Mary's Augustinian Abbey was built on the site now known as Abbey Fields. The order was disbanded in 1538; the abbey and its chapel were demolished and a manor house was built on the site. The village church, St Michael's, was constructed in the 13th century. It was mostly rebuilt in 1873, although the tower is the original.

In 1781 Richard Arkwright bought an old corn mill on the River Dove and converted it to a water-powered cotton mill. This introduced industry to a predominantly agricultural community. With industry came the canal and railway networks, and Rocester became an important trading point. The mill was a great driving force in the expansion of the village; its owners were responsible for much building in the village. The mill has now been converted into the JCB Academy.

On 1 August 1849, Rocester railway station was opened by the North Staffordshire Railway. 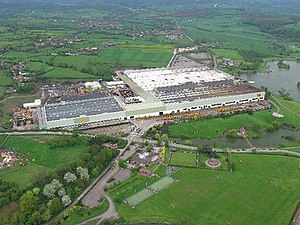 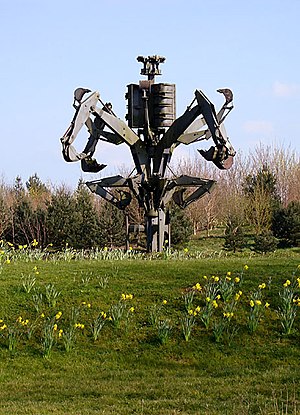 The Fossor, at the JCB headquarters

The mill remained the primary employer until the 1950s, and finally closed in 1985. By this time another major employer had arrived in the village, J. C. Bamford. The present factory, on the site of the original 1950s factory, was opened in 1970 and is the world headquarters for the company.

There are a number of sculptures around the JCB site and landscaped parkland nearby. Most significant of these is The Fossor, which takes its name from the Latin for "the digger". The steel sculpture, created by Walenty Pytel, is made entirely of digger parts and is a powerful representation of JCB.[2] It weighs 36 tonnes, stands 45 feet high and was the largest steel sculpture in Europe at the time of its creation in 1979. It can be seen from the B5030 road that passes it.

The village has several businesses, a school, a pre-school and a church.

Rocester lies on the Staffordshire Way, and is the southern terminus of the Limestone Way, a footpath which runs 46 miles north to Castleton in the Peak District.