The headquarters of the university and its main urban campus are located in Kingston upon Hull, in the East Riding of Yorkshire and it had for several years a smaller campus in Scarborough on the coast of the North Riding of Yorkshire, which has since been separated as an institution. The main campus is home to the Hull York Medical School, a joint initiative with the University of York.

The University's Brynmor Jones Library was the workplace of the poet Philip Larkin who served as its Head Librarian for over thirty years. The Philip Larkin Society organises activities in remembrance of Larkin including the Larkin 25 festival which was organised during 2010 in partnership with the University. Andrew Motion, another prominent poet, and former poet laureate, also worked at the university.

Alumni of the University of Hull are especially prominent in the fields of politics, academia, journalism and drama, including several prominent Labour Party Members of Parliament, journalists and the film director, playwright and screenwriter the late Anthony Minghella. 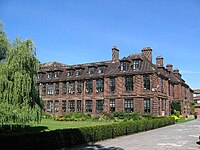 The foundation stone of University College Hull, then an external college of the University of London, was laid in 1927 by Prince Albert, the Duke of York (who later became king as George VI). The college was built on land donated by Hull City Council and by two local benefactors, Thomas Ferens and G F Grant. A year later the first 14 departments, in pure sciences and the arts, opened with 39 students.

The college at that time consisted of one building, now named the Venn building (after the mathematician John Venn, who was born in Hull). The building now houses the administrative centre of the university. Other early buildings include the Cohen Building, which originally housed the college library, and Staff House, built in 1948 as the Student's Union. Another early structure was the Chemistry Building, built in 1953. With the rapid expansion of student numbers which took place in the 1950s many many academic departments were housed in temporary buildings, colloquially known as 'huts,' which gave the campus the feel of an 'academic army camp.'[2]

Though many of the buildings on Hull's campus are of red brick it is not a redbrick university in the strictest sense of the term, as it was not founded as part of the civic university movement of the late Victorian and Edwardian eras.[3] Hull, with its origins in the 1920s, has been categorised as a 'younger civic university' (also referred to as a "Whitetile university") and it is placed between the 'redbricks' and the 'plateglass universities' founded in the 1960s.[4] The university's expansion in recent decades has seen the addition of a variety of building styles: from the traditional older buildings, through 1960s teaching blocks, to modern additions.

The first principal of the college was Arthur E Morgan (1926–1935), the second was John H Nicholson (1935–1956), who also served as the university's first vice-chancellor when the college was granted university status.

The university coat of arms was designed by Sir Algernon Tudor-Craig in 1928. The symbols are the torch for learning, the rose for Yorkshire, the ducal coronet from the arms of the City of Hull, the fleur-de-lys for Lincolnshire and the dove, symbolising peace, from the arms of Thomas Ferens. These symbols were later reused to create the current university logo. The motto, Lampada Ferens (Bearing the Torch), incorporates the name of the university's founding father (Thomas Ferens) within a Latin pun.[5]

The academic authority and autonomy of the university is symbolically embodied in the ceremonial mace. Made of gilt silver, and incorporating devices from the Hull University coat of arms, the mace was presented to the university in December 1956 by the Lord Mayor of Hull. As a gift from the city it also reflects the close relationship between "town and gown" existing in Hull. The mace is carried in procession and displayed at all major university ceremonies.[5]

The college gained its Royal Charter in 1954, which empowered it to award degrees of its own, making it the third university in Yorkshire and just the 14th in England. Within a year of the charter's being granted applications to study at the new university had doubled, and in 1956 student numbers topped 1,000 for the first time. 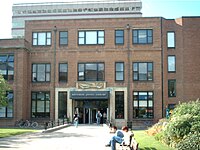 The Brynmor Jones Library, which houses more than a million volumes, was constructed in two phases: the first phase was fully completed in 1959, with a tower block extension officially opened in 1970. During the 1950s and 1960s a considerable number of academic buildings were built, including the Larkin and Wilberforce Buildings (originally given other names). The 'Martin Plan' of 1967, Sir Leslie Martin was the university architect, envisaged a campus with its tallest buildings in the centre surrounded by buildings diminishing in height towards the perimeter. In the course of the 1960s most of the departments housed in temporary structures were moved into new purpose-built premises. However, Biochemistry was still partially located in a 'hut' to the rear of the Venn building into the early 1980s.[2] This early phase of expansion through building ended in 1974, after this year there was to be no further academic building construction on the campus until 1996. However, student numbers doubled in this period, with the university becoming highly efficient in using its existing building stock.[6]

In 1972, George Gray and Ken Harrison created room-temperature stable liquid crystals in the university chemistry laboratories, which were an immediate success in the electronics industry and consumer products. This led to Hull's becoming the first university to be awarded the Queen's Award for Technological Achievement for the joint-development of the long-lasting materials that made liquid crystal displays possible.[6][7]

Expansion in the 21st century

In 2000 the university bought the site of University College Scarborough on Filey Road, Scarborough, plus two linked buildings on the same road. This became the University of Hull Scarborough Campus.

A further significant expansion took place in 2003, when the buildings of the University of Lincoln campus, which were situated immediately adjacent to Hull University's main campus, were purchased. The acquisition increased the size of the Cottingham Road campus by more than a third. It was the largest single act of expansion in the history of the university. Hull University fully occupied the newly acquired premises in the 2005 academic year; the area becoming the university's West Campus. The site now houses the Hull York Medical School and the relocated business school, which is located in three of the most prominent buildings – Wharfe, Derwent and Esk.[6]

In 2012, the University began the ambitious refurbishment of the Brynmor Jones Library, a £27 million project which will transform the 7 storey former workplace of Philip Larkin, into a learning hub suitable for students for years to come. The project is due for completion in the summer of 2014.[6]

The Hull History Centre, which opened in 2010, is located in a new building on Worship Street in Hull city centre. It unites the holdings of Hull City Library's Local Studies collections and Hull University's archives and is run in partnership between the City Library and University Library.

The main campus is located in a residential district of North Hull on Cottingham Road. It occupies a single, clearly defined site and is self-contained in regard to catering and entertainment for students and staff. Most of the major features of the campus are described in the 'history' section above; in addition, the campus has a large Students' Union building, which is often described as one of the finest in the country, and extensive playing fields and other sports facilities. The large village of Cottingham on Hull's north-western outskirts houses most of the university-owned student accommodation. 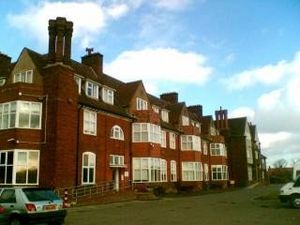 University College Scarborough became a satellite campus of the university in 2000, located in Scarborough in the North Riding. Scarborough ran somewhat independently of the main campus in Hull. There were approximately 2,000 students attending courses at Scarborough per academic year, with graduation ceremonies taking place within Scarborough's historic Spa Complex. It had the Keith Donaldson Library and studt and student facilities.

In 2014 however, the University determined that the Scaraborough Campus was not sustainable and the next year the college became art of the Hull College group and returned to its former name, 'University College Scarborough'. It still hosts programmes from both Hull College and the University of Hull.[8]

Faculty of Science and Engineering

Notable centres for research include the Hull Immersive Visualisation Environment[9] (HIVE), the Institute for Estuarine and Coastal Studies[10] (IECS), the E.A. Milne Centre for Astrophysics (MCA)[11] and the G W Gray[12] Centre for Advanced Materials. The Chemistry department is noted for its research record, and the Computer Science department is noted for its Computer Science and Video Game development degrees.

A new biomedical research facility will bring academics from biology and chemistry together and will include Positron Emission Tomography with CT scanning (PET-CT) and two mini cyclotrons. Two new research groups will be based at the facility, called the Allam building: one focusing on cardiovascular and metabolic research and the other on cancer.

Faculty of Arts and Social Sciences 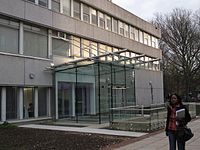 Most social science and law-related department housed in the refurbished Wilberforce Building. Includes the School of Arts and New Media at Scarborough, formed in August 2006. Drama is taught in the Gulbenkian Centre, including the Donald Roy Theatre. History, English, Languages and Music are in the Larkin Building.

Faculty of Health and Social Care

Based in the Calder, Aire and Dearne buildings in the west campus (former campus of universities of Humberside, then finally Lincoln). The Leven building contains mock clinical areas, wards, an operating theatre and a midwifery suite, within a simulated environment.

Teaching of medicine began in October 2003 on the west campus. Medical students receive joint degrees from the universities of Hull and York.

The school includes the 'International Society for the Study of Cough' based at Castle Hill hospital on Castle Road in Cottingham. Third and fourth year students train also at hospitals in Scunthorpe, Grimsby, and Scarborough.

Established in 1994, one of the Postgraduate Medical Institute's sections is the Yorkshire Cancer Research-funded Centre for Magnetic Resonance Investigations which, under the directorship of Lindsay W. Turnbull, is actively engaged in researching the application of magnetic resonance imaging and magnetic resonance spectroscopy techniques to cancer research.

The Esk Building – part of the Business School

Established in August 1999, Hull University Business School has around 3,500 students from over 100 countries. Students are taught at the Hull and Scarborough campuses, with additional MBA students taught overseas. On the Hull campus, the school occupies refurbished listed buildings on the West Campus which were opened in 2005. The Logistics Institute was completed in September 2007, and officially launched in March 2008.[17]

In 2011, following accreditation by the Association of MBAs, EQUIS and AACSB, the Business School became the first in Yorkshire, and the 13th in the UK, to achieve "triple crown accreditation" status.[18]

The Wilberforce Institute for the study of Slavery and Emancipation is located in Oriel Chambers on the High Street in Hull's Old Town, adjacent to Wilberforce House. It undertakes graduate research in the field of slavery and human rights and offers an MA in Slavery Studies. The Institute draws upon the university's academic expertise in history, law, social sciences and English.

Hull University Union is the main provider of student catering, services and entertainment on the university campus. It has over 100 student societies affiliated to it, and also runs a volunteering and charity hub. Approximately 50 sports clubs are affiliated to the Students Union's Athletic Union, many of which compete in British Universities and Colleges Sport national university leagues. The University Union was voted Students' Union of the Year in July 2012.[19]

The student union building comprises an on-site nightclub as well as a number of bars and catering outlets. The building also houses a shop, a Waterstones book shop, advice centre, and the university-run careers service.

There is a monthly student newspaper called The Hullfire, an online television station called Hullfire TV and a student radio station which broadcasts from the union building called Hullfire Radio.