Hapton is a village and civil parish in Lancashire, three miles west of Burnley town centre. According to the United Kingdom Census 2011, the parish has a population of 1,979,[1] a decrease from 3,769 in the 2001 census.[2]

The Leeds and Liverpool Canal and M65 motorway both pass through the village.[3][4]

The name Hapton is thought to have been derived from the Old English words 'hēap' and 'tūn' meaning the enclosure on the hill.[5]

The civil parish of Hapton is thought to be the amalgamation of three mediæval manors. Hapton is linked to the original castle and village that would later develop near it. To the northwest lies Shuttleworth, thought to be the origin of the family better known at Gawthorpe Hall. The third manor was called Birtwistle and its location is uncertain, but has been suggested to have been near the site of Hapton Tower. The township extends from the River Calder in the north, over the Hameldon Hills to the Forest of Rossendale in the south.[6][7]

The castle of Hapton once stood on the eastern side of Castle Clough, on the edge of a precipitous slope. Nothing is known of its origin. Further up the hill in Hapton Park, however, Hapton Tower was constructed about 1510 by Sir John Towneley (1473-1540) and was inhabited until 1667. The tower was a large square building about 20 ft high with, on one side, the remains of three round towers with conical bases. It reportedly had two main entrances opposite each other. Both castle and tower were in ruins after the Restoration and today hardly anything remains of either. The only masonry of the castle now visible is a length of wall about four yards long and four feet six inches thick and four courses high under two trees.[8]

From the Haptons the land passed to the de Leghs, when John de Hapton's daughter Cecilia married Richard de Legh in 1205. In the 12th century part of the manor was granted to William de Arches by Robert de Lacey.[9] In 1328 Gilbert de la Legh, the manager of the cattle farms in the forests, purchased the manor of Hapton and in 1356 his grandson, also called Gilbert acquired Birtwistle. His son John would marry Cecilia one of the co-heirs of Towneley Hall and their grandson John Towneley would later take control of all three manors.[6] In 1482, Sir John Towneley succeeded to the estates at the age of nine, when his father, also called Richard, died of wounds obtained during the capture of Berwick Castle.[10][9] He was married to Isabella Pilkington, the daughter of his guardian and later served as a soldier, being awarded a knighthood in 1497. With Royal permission he enclosed the manors of Towneley and Hapton, which he connected with the illegal enclosure of Horelaw Hill.[9] After the King's commissioners re-let the Forest of Rossendale to local farmers in 1507, Towneley in 1514 enlarged his park at Hapton to embrace 1,100 Lancashire acres (2,000 acres}, about half of the township[11]) making it the second largest in Lancashire after that of the Earl of Derby at Knowsley.[12] An astute businessman he bought land, corn mills and corn tithes. He was High Sheriff of Lancashire in 1532.[8] His enclosure of this land seems to have made him unpopular, as an old local legend claims that his ghost haunts the hills.[10]

In his will dated 1627, Richard Towneley (1566-1628) left all his armour at Whalley to his son Richard. The will of Richard's wife Jane, dated 1633, provides the last recorded instance of the Towneleys at Hapton Tower.[8] Parts of the Tower are thought to have been incorporated into other buildings including Dyneley Hall in Cliviger, Browsholme Hall in Bowland and closer to the site at Watson Laithe Farm.[13]

By 1661 the lower part of the Park, north of the Tower extending to Habergham Brook, had been divided into large enclosures and these where subsequently divided into smaller ones that are still worked by today's farmers.[14] The land would remain with the Towneley estate, descending to Caroline Louisa, eldest daughter and co-heir of Colonel Charles Towneley and wife of Montagu Bertie, 7th Earl of Abingdon, who put 2,500 acres in Hapton up for sale in 1923.[15]

Shuttleworth has been occupied since at least the 14th-centry. Henry de Shuttleworth died before 1325 holding lands in Shuttleworth of John son and heir of Edmund Talbot. The estate was purchased by the Starkies of Huntroyde Hall in 1734.[6] Shuttleworth Hall is about a mile north-west of the town along the A6068 road toward Padiham. The house dates from 1639 and is a working farmhouse.[16]

Manchester Road appears on a map of 1661, and is likely part of an old route from Padiham over the moor to Haslingden. Although the Leeds and Liverpool Canal opened to Burnley in 1801, the stretch from Hapton to Blackburn was not completed until 1810 and it was 1816 before it connected to Liverpool. A Wharf was situated near the Hapton Bridge presumably to serve Padiham.[17] Accrington Road was the last of the Turnpike trust roads to be built in the local area in 1827.[18] The Castle Clough Works was established as a cotton spinning mill in 1792, where the old road to Shuttleworth crosses Castle Clough Brook, possibly the site of an earlier corn mill.[19]

The present village of Hapton is largely a product of the Industrial revolution. By the time of first Ordnance Survey map of the area, published in the 1840s, tram roads cross Stone Moor to the north, connecting the Wharf to collieries there, with more coal mines evident near the castle site. The Castle Clough Works was labelled as a dye works, but the rest of the township is still rural. The Hapton Chemical Works was established by Riley and Smalley on the northern side of the canal and east side of Manchester Road in 1842 to provide chemical products for the textile trade. It was taken over by William Blythe by 1915.[19] 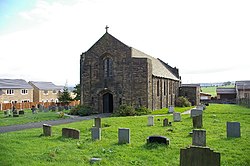 Although the East Lancashire railway line was constructed through the township in 1848, the railway station didn't open until the 1860s.[20] Perseverance Mill was built for John Simpson in 1867 and had an attached magneto works.[19] In 1888, Walter and Joseph Simpson established an Electrical Engineering company in Hapton called Simpson Bros. They specialised in the electrification of cotton mills and to promote the new business they installed three electric street lights, making Hapton the first village in Britain with electric lighting.[21] By the 1890s about a dozen streets of terraced houses extended from the mill, along Manchester Road to the station. The chemical factory covered approximately the same area as the village and had its own sidings. Another weaving shed, Robert Walton’s Hapton Mill, was erected on the canal in 1905-6 and there was also Mathers Brick & Tile Works, the site later occupied by Lucas Industries and redeveloped for residential use in the 1990s. The only inn in Hapton before 1848 was the Towneley Arms which was situated in a no longer extant building on the north-east corner of the Lane Ends road junction. The Hapton Inn, across Accrington Road was established in the later 1800s.[19] A schoolhouse is also existed in 1848, on Manchester Road, then in an isolated position north of Lane ends.[22] St Margaret's Church was founded in 1914,[23] with Church of England services previously held in the schoolroom.[6]

By 1931, although housing in the village had approximately doubled, only the Church, vicarage, new school, recreation ground and a handful of houses existed south of the railway. However Lane Ends, on the Burnley Accrington Road had developed into a hamlet. By 1961 semi-detached housing had extended along Manchester Road to Lane Ends. 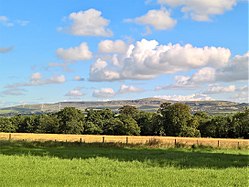 At the southern end of the parish are the Hameldon Hills, the summits of which attain 1,305 ft and 1,343 ft. On the western side Castle Clough Brook runs north through a significant valley to join the Calder at Eaves Barn, however it is Shorten Brook further west that forms the actual boundary. On the eastern side New Barn Clough also flows north to join Habergham Brook, which along with Hapton Clough forms Green Brook at Spa Wood. In the centre a number of small streams combine to form Shaw Brook, which flows on the eastern side of the village and joins Green Brook just before its confluence with the Calder in Padiham.[6]

The underlying geology of the Hapton area consists of Lower Westphalian coal measures of the Carboniferous era, while the hills are formed of Carboniferous sandstones, ranging from millstone grits to finer grained stone such as the Dyneley Knott flags and the Dandy Mine Rock. The drift cover consists primarily of glacial till deposits, which cause poor-drainage soils, meaning the grassland is prone to reed growth.[24] A fault known as the Deerplay fault runs in a north-westerly direction under the eastern side of the parish toward Lowerhouse.[25]

There is a Site of Biological Importance at Mill Hill, Castle Clough Woods. There are many native and visiting varieties of birds, plants and animals. In addition to UK common species, green and lesser-spotted woodpecker, willow tit, yellow wagtail, woodcock and herons have all been spotted in the area. Water vole, newt and frog can be found on the steeper-sided river embankments and in large marshy wet areas by the stone bridge at the ford known as Castle Clough South and Childers Green. Bluebells grow in abundance.The entire area was classed as an area of Biological Heritage to be protected under Lancashire Council's Local Plan for Burnley. There is free parking at Mill Hill Picnic area, about 27 yards upstream of the ford.[26]

The Burnley Way passes through the parish, passing Shuttleworth and following Castle Clough and the part of the old road to Haslingden as it climbs over Hameldon to Clow Bridge.[27] 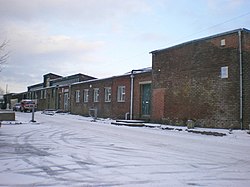 On the eastern side of the parish a colliery began in 1853 at Spa Wood, this would develop into a significant enterprise known as Hapton Valley Colliery, which would survive to be Burnley’s last deep mine, operating until 1982.[28] By the 1890s a tram road connected it to Porters Gate Colliery in the southeast and Barclay Hills Colliery in the northeast and ultimately to a coal yard on the canal at Gannow in Burnley.[29]

An number of smaller quarries on the hills south of the village grown by 1886 into the Hameldon Quarries when Henry Heys and Co took over the operation. It supplied large quantities of flagstones for the construction of mills in Burnley and Padiham. At that time tram roads connected the main site to another at Snipe Rake and to a facility at Park Gate Farm. These quarries ceased operation in 1909, but extensive remains are still exist. Another on the canal west of the village (Hapton Hall) was worked until 1914.[29]

During World War II the Government funded the construction of plant for Magnesium Elektron at Pollard Moor to produce metals for the aircraft industry. It closed afterward, and was later occupied by Hepworth Building Products.[29] Since 2010, with the construction of a new bridge over the canal, the site has been redeveloped into the Burnley Bridge Business Park. It neighbours the Network 65 business park, developed in the 2000s, both connecting to junction 9 on the M65 motorway.[30][31]

The William Blythe factory, which at its peak employed 1,000 people, closed in 2006. Ownership of the 38-acre site passed to multi-national Synthomer PLC (then Yule Catto), who funded work to remediate the land for future housing use.[32]

At the time of 2011 census only 14 people where listed as long-term unemployed in the parish, with the most common employment sectors being manufacturing, retail, health and education.[1]