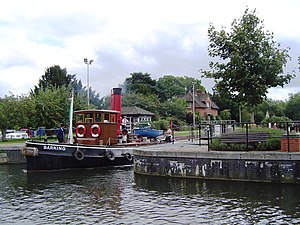 Hambleden Lock is a lock with a long weir situated on the River Thames in Berkshire. The lock is on the south bank between Aston and Remenham. It was built by the Thames Navigation Commission in 1773, The lock is named after the village of Hambleden in Buckinghamshire, a mile to the north.

The great weir is impressive and there are walkways over it from the lock to the small village of Mill End on the Buckinghamshire bank. Here is situated the picturesque Hambleden Mill, and the site of a Roman villa is nearby.

The mill at Hambleden is mentioned in Domesday Book, which implies there was also a weir here then. There is reference to the weir, with a winch (for pulling boats through the flash lock) in 1338. The pound lock was the fourth downstream in the series of locks built after the 1770 Navigation Act. The others were built of fir which had to be replaced by oak after a dozen years. In 1777 a small brick house was built and Caleb Gould became keeper. This eccentric, who baked bread for bargemen, ate a dish of onion porridge every night, wore a long coat with many buttons and walked daily to Hambleden marking a cross on the ground where he reached, was in post at the lock for 59 years and was succeeded by his son. 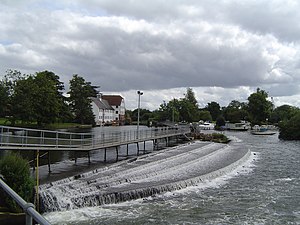 Weir, mill and walkway at Hambleden

There is reference to continuing use of the flash lock and winch at the weir until the middle of the nineteenth century. The channel downstream of the lock which takes navigation clear of the weir and weir pool was excavated in 1825. The lock was completely rebuilt in 1870 after years of complaint about its condition. In 1884 the new weirs were built and after public complaints the walkway was built to reopen the ancient right of way.[1] The lock was rebuilt in 1994.

The lock can be reached from the village of Aston on the same side, after a short walk; access to the track leading to the lock is immediately to the west of the Flower Pot pub. From the opposite side the walkways across the weirs provide easy access from Mill End.

The river curves round to the south, passing, on the Buckinghamshire bank, Greenlands, a large country house built in the nineteenth century which is now the home of the Henley Management College. After the turn is Temple Island, which is the start of the Henley Royal Regatta course. The regatta is rowed upstream over a wide straight course of 1 mile, 550 yards. On the Berkshire bank are open fields, lawns and Remenham Farm, part of the village of Remenham. The regatta lawns continue up to Henley Bridge, while the town of Henley on Thames stretches along the Oxfordshire bank.

After Henley Bridge is the Henley river front with boat hire and a landing stage for riverboat cruises. After a small wooded island is the larger Rod Eyot, and Mill Meadows provides public open space on the Henley side of the river. The River and Rowing Museum is situated here. On the Berkshire bank the land rises steeply with a wooded escarpment hanging over Marsh Lock.

Sports clubs on the reach

The Thames Path stays on the Berkshire bank to Henley Bridge, and is here in better condition for the benefit of the rowing coaches who cycle along it. It crosses Henley Bridge and continues on the Oxfordshire bank to Marsh Lock. 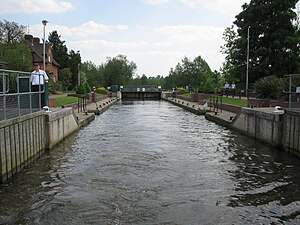 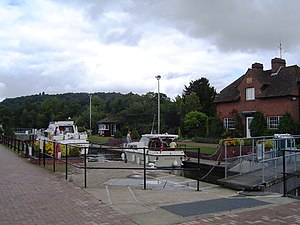 Looking upstream from the lock

Since the 1940s kayakers and canoeists have used the weir structure for recreation.

Jerome K. Jerome wrote of "the rather uninteresting river residence of my newsagent - a quiet unassuming old gentleman, who may be met with about these regions, during the summer months, sculling himself along in easy vigorous style, or chatting genially to some old lock-keeper, as he passes through". The newsagent in question was W. H. Smith, whose residence was Greenlands.

Caleb Gould's gravestone at Remenham has the elegy

This world’s a jest,
And all things show it;
I thought so once,
And now I know it.