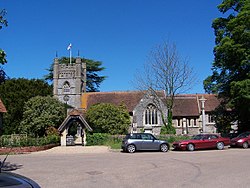 Hambleden is a small village and parish in the Desborough Hundred of Buckinghamshire. It is about four miles west of Marlow, and about three miles north-east of Henley-on-Thames in Oxfordshire.

The village name is Anglo-Saxon in origin, and means 'crooked or irregularly-shaped hill'.[2] It was recorded in the Domesday Book of 1086 as Hanbledene, though previously in 1015 it was known as Hamelan dene. St Thomas Cantilupe, the Lord Chancellor and Bishop of Hereford, was born in Hambleden in 1218. In 1315 a Royal charter was granted to hold a market in the village, and a fair on St Bartholomew's Day (24 August) every year. The charter was reconfirmed in 1321, though appears to have not lasted much longer than this.

The village was a base for US soldiers during the buildup to D-Day in 1944.

The brick and flint cottages in the centre of the village conform to a similar design and have dormer windows topped with red tiles. St Mary's church dates from the 14th century and includes a conspicuous memorial to Cope D'Oyley (who died in 1633) and his family. The tower contains eight bells and the ceiling is quite intricately decorated in parts. The post office in the village serves also as the local shop and café.

The Elizabethan manor house opposite the church, formerly the home of Maria Carmela Viscountess Hambleden,[3] was built in 1603 of flint and brick for Emanuel 11th Baron Scrope who became Earl of Sunderland. Charles I stayed there overnight in 1646 while fleeing from Oxford. The Manor House, Hambleden is also the former home of Lord Cardigan who led the ill-fated Charge of the Light Brigade. Another notable (Listed Grade II*) building is Kenricks which overlooks the cricket ground and was the previous manor house and the home of Philadelphia Carey Lady Scrope, a cousin and Lady-in-Waiting to Queen Elizabeth I. On her death in 1627 it became The Rectory and was altered in 1724 by the Rector Rev Dr Scawen Kenrick. It ceased to be The Rectory in 1938 and was acquired by the 3rd Viscount Hambleden and renamed Kenricks.

Roman remains were unearthed to the south of the village in 1912. A contested theory was put forward in 2010 that a military brothel might have formed part of the Yewden villa site, after archaeologists discovered skeletal remains of what appeared to be 97 newborn babies.[4]

Saint Thomas Cantilupe was born in the old Manor House (now Kenricks) in 1218. He became Chancellor of Oxford University, Bishop of Hereford and Lord Chancellor of England. He was canonised by Pope John XXII in 1320 and was the last Englishman to be canonised before the Reformation. The Hambleden Estate was held by the Scrope family from 1365 to 1627. Philadelphia Carey, 10th Lady Scrope was a granddaughter of Mary Boleyn, the sister of Queen Anne who was executed by Henry VIII in 1536. The Estate was acquired in 1925 by Frederick Smith, 2nd Viscount Hambleden, who owned the adjoining Greenlands Estate. The Smith family sold the western part of the Estate in 2008 to the Swiss financier Urs Schwarzenbach. Major General Miles Fitzalan-Howard, 17th Duke of Norfolk, lived in the parish until his death in 2002 and his widow Anne continues to live there. Lord Cardigan, famous for his role in leading the ill-fated Charge of the Light Brigade, was born in the Manor House in 1797. The sea chest that he took to the Crimea can be seen in the church. Roger Marquis, 2nd Earl of Woolton lived at Kenricks in the 1960s. Phil Vickery, Rugby Union London Wasps player and England 2003 World Cup Winner, lived in Hambleden[5]

Mill End is the southern small hamlet in the civil parish on the main A4155 road between Henley-on-Thames and Marlow, by the River Thames. Mill End consists of 32 houses, some on the river bank and others on the northern side of the main road. The largest historic home is at the heart of its cluster of buildings, Yewden Manor, listed Grade II for architecture.[6]

The name clearly comes from the mill that is situated near the lock, on the fast-flowing, narrow, high-sided Hambleden Bourne, which discharges here. Mill End Farm, which has been run by the Bowden family since at least 1965, is opposite the lock and has farmed most of the land in and around the southern Hambleden area. This part of the Thames is characterised by willow trees and a large biodiversity of wildlife including swans, grebes, ducks, herons, terns and kingfishers. The footpath next to Hambleden Lock, the public towpath, provides a significant amenity to Mill End.

Anne Petrie, daughter of the famous Egyptian archaeologist Flinders Petrie lived in Mill End; she is buried in Hambleden church-yard.

In the Mill End part of the village are a watermill, lock and villa. Adjacent to the converted barns and the ordinary home named Mill House, which had served for centuries as home to the moderately wealthy miller of the district,[7] is the much larger, often-photographed Hambleden Mill,[8] which has been converted into flats; this is downstream of a pedestrianised weir from Hambleden Lock. These feature in Jerome K. Jerome's novel Three Men In A Boat.

The site of an unusually immediately Thameside Roman villa[9] adjoins the east of the development.

In Ridge Wood atop the hill opposite the village is a large avenue of giant sequoia and tall pine trees well worth a ramble.

Nearby by the Thames

Henley Management College lies just over half a mile west and is also on the Thames.

Danesfield House, a hotel and spa is two and a half miles east of the village on a hillside of the same relatively steep bank.

The village has often been used as a location for films, such as The Captive Heart (1950), Chitty Chitty Bang Bang, The Witches,The Legacy, Dance with a Stranger, The Black Cat, the opening scenes of the remake of The Avengers starring Ralph Fiennes and also some scenes in 101 Dalmatians. Hambleden was also used in the HBO mini-series Band of Brothers to depict Easy Company's training in Britain. Also, the Tim Burton film Sleepy Hollow, starring Johnny Depp and Christina Ricci, included a month-long location shoot at Lime Tree Valley, in Hambleden.

There is only one Shop/Post Office in the centre of the village. Other properties have facades that are more in keeping with a traditional country village. In 1979 Hambleden church was the setting for a programme featuring Harry Secombe called Cross on the Donkey's Back. It was an Easter programme by Thames Television and also featured a group of school children from Hambleden C of E School. The 2010 film Nanny McPhee Returns also used parts of the village in some of their scenes.