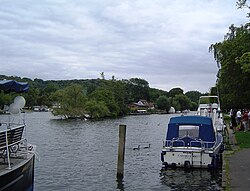 Rod Eyot from the Henley direction 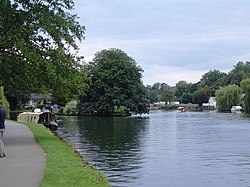 Rod Eyot or Rod Ait is an island in the River Thames belonging to Oxfordshire near Henley-on-Thames. It lies in the reach above Hambledon Lock, close to Mill Meadows and the River and Rowing Museum.

The island is populated with ten chalets and a brick cottage and is inaccessible except by boat. River traffic passes on either side in accordance with the rules of the river. Several of the properties are occupied on a permanent basis, whilst others are weekend recreational homes. Each of the properties has its own riverbank moorings. Henley town centre is five minutes by boat from Rod Eyot. There is another unidentified island which is unpopulated downstream between Rod Eyot and Henley Bridge known locally as bird island. Until 1907, when the Town council sold off the plots, it was known as Corporation Island. At the time, only the brick cottage existed, originally being the home of the Farrier who shoed the horses which towed the River Barges at the time.

Rod Eyot features in an old painting owned by the Queen which portrays the river viewed from the Wargrave Road bank. At the time, the island was part of a collection of low lying, uninhabited marshy islands.