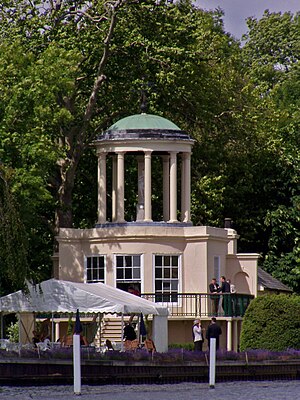 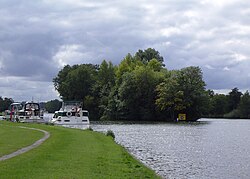 Temple Island from the downstream side

Temple Island is an island in the River Thames belonging to the parish of Remenham in Berkshire. The island lies just downstream of Henley-on-Thames in Oxfordshire, on the reach above Hambleden Lock between the Buckinghamshire and Berkshire banks. The main significance of the island is that it lies at the start of the course for Henley Royal Regatta.

The island includes an elegant ornamental temple (a folly) designed by the 18th century architect James Wyatt and constructed in 1771. It was designed as a fishing lodge for Fawley Court, a nearby historic house that Wyatt also remodelled in the 1770s on the commission of its owner, Sambrooke Freeman. Wyatt designed both the structure of the building and its interior decoration; it is likely that he also provided designs for the original furniture. The wall paintings in the principal room are thought to be the earliest surviving example of the Etruscan style in Great Britain, predating more famous examples such as the Etruscan Dressing Room at Osterley Park by Robert Adam.

In the 19th century, the island's ownership passed, with Fawley Court, from the Freeman family to the Mackenzie family. In 1952, upon the death of Roderick Mackenzie, Henley Royal Regatta asked his daughter Margaret for 'first refusal' should she ever decide to sell the island. It is not clear whether an understanding was reached. By the early 1980s, the advent of corporate entertaining greatly increased the potential value of the island. In 1983 the Stewards of the Regatta again began making overtures to Margaret Mackenzie but in 1986 the island was placed on the open market.

The downstream portion of the island was retained as a nature reserve and was extensively replanted with trees.

The Victorian balcony which had decayed was replaced. The wall paintings, which had deteriorated and had been badly over-painted, were repaired and brought back to the colours originally intended by Wyatt. A statue of a nymph, in keeping with the style and age of the Temple, was placed under the cupola.