Guiting Power is a small Gloucestershire village in the Cotswolds, on the slopes above a small valley formed by a tributary of the River Windrush. It is midway between Cheltenham and Stow-on-the-Wold.

There was a late Anglo-Saxon settlement on this site, when it was called Gyting Broc. The name 'Guiting' comes from the Saxon word getinge, for 'rushing', perhaps referring the River Windrush,.[1] while the suffix 'Power' refers to the ownership of the manor by the le Pohers family.

The parish church of St Michael and All Angels is situated on the south edge of the village. It is of Norman origin, with a later Victorian transept. The north and south doorways were preserved in the renovations at that time. Extensive remodeling took place in the 13th and 15th centuries and the church was enlarged in the first half of the 1800s.[2] The 12th century chancel was extensively modified in 1903.

The church is a Grade II listed building.[3]

St Michael's is part of the Benefice of the Seven Churches which also includes Temple Guiting, Cutsdean, Farmcote, Lower Slaughter with Eyford, Upper Slaughter and Naunton.[4]

"Guiting Power" is a hymn tune by John Barnard, named after the village, for the hymn "Christ triumphant, ever reigning".

In 1968, The Manor lands and over half of the homes were purchased by Raymond Cochrane, who intended to renovate and develop the infrastructure. In the 1970s, he formed the Guiting Manor Amenity Trust, a charitable trust, to oversee the village after his death. The trust manages the village and rents out some of the 67 houses that it owns at moderate prices.[5][6]

Research indicates that there has been a settlement in the area since 780 or perhaps earlier. Excavations have revealed Iron Age activity, a Roman figurine, a small Saxon sarcophagus and the remains of a very early Saxo-Norman chapel.

The village was based on a manor owned by the King but had declined by the time of the Domesday Book of 1086. 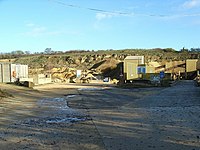 The area includes abandoned quarries where the "yellow" and "white Guiting" limestone was mined; other areas of the Cotswolds more often used the oolite stone. Quarries in nearby villages still produce this type of stone.

By the 1950s, the village was run down because of a depression in the farming industry. By that time, 12 cottages had been purchased by Moyra Davidson (in the 1930s)[9] for renovation and these, plus other buildings were subsequently by Raymond Cochrane. Many of the properties have been renovated by the Trust.[10]

The Guiting Power is unusual for its size in having a Post Office, a village hall, a children's nursery, a bakery, village shop and two public houses.

Nearby are the excavated foundations of the original Anglo-Saxon church and a large kerbed round barrow shown as tumulus on Ordnance Survey mapping.

To a large extent, the village owes its preservation to the Guiting Manor Amenity Trust. 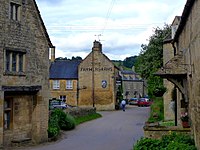 The Wardens' Way passes through the village, on its 14-mile route from Bourton-on-the-Water to Winchcombe, passing close by the church. (It joins the Oxfordshire Way to the Cotswold Way and can be combined with the Windrush Way to make a circular route.) The Wardens' Way passes through the Cotswold villages of Guiting Power, Naunton, Lower Slaughter and Upper Slaughter.

There is a 17-acre wetland nature reserve, where a rich flora and fauna thrive.

The village School (built in 1872) was closed down and was purchased by the Trust; it was then converted into the village playschool for residents' children.[5]

The Trust also owns a farming community rented to its subsidiary, Guiting Manor Farms Ltd which specializes in sustainable food production. Various crops are grown and sheep are raised on the 580 acres;[11] the lambs are sold for meat.[12]

The nearby Cotswolds Farm Park, privately owned by Adam Henson,[13] is a tourist attraction with 50 breeds of farm animals. The facility also operates a campsite with pitches for campers, 14 with electricity. [14][15]

The Guiting Music Festival (formerly the "Guiting Festival") was founded in 1970. It runs for ten days, starting in the last week of July every year.[16] It typically comprises eight evening concerts covering the genres of classical, folk and jazz. These are normally held in the Village Hall. Two open-air concerts are held in the adjacent playing fields on the first and second Sundays. It is a Registered Charity.[17]