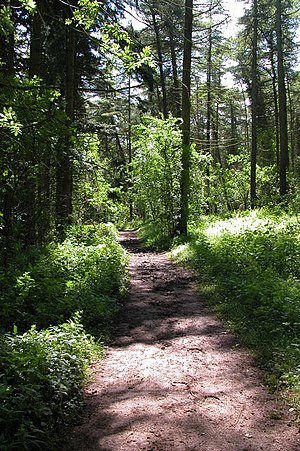 The Windrush Way is a walking route in the heart of the Cotswolds, in the east of Gloucestershire. It is named after the River Windrush, the uppermost reaches of which flow down to Bourton.

The whole route is 14 miles long, making it a full day’s walk.

The western starting point is Winchcombe, once the chief town of 'Winchcombeshire', whence it runs south-west to cross the headwater streams of the Windrush near Hawling. From there, the route turns east and, with a diversion off the road, follows the pretty stream down to finish at Bourton-on-the-Water.

On the route there are no villages other than some lost, Mediæval villages. There is though a sister route, the Wardens' Way, which winds through some of the pretty, honey-stone villages for which the Cotwolds are famous.

The route links the Cotswold Way at Winchcombe with the Oxfordshire Way at Bourton-on-the-Water.