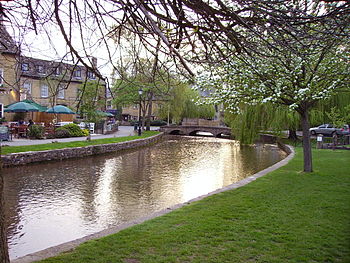 The Windrush at Bourton-on the-Water

The River Windrush is a river in the Cotswolds, flowing through Gloucestershire and Oxfordshire, and which is ultimately a tributary of the River Thames.

The Windrush rises in the Cotswold Hills in Gloucestershire northeast of Taddington, which is north of Guiting Power, Temple Guiting, Ford and Cutsdean.

The Windrush flows for about 40 miles, through Bourton-on-the-Water, and the village of Windrush, into Oxfordshire. In Oxfordshire it flows Burford, Witney, Ducklington and Standlake. It meets the Thames at Newbridge upstream of Northmoor Lock.

The river is host to fish, including trout, grayling, perch, chub, roach and dace. It held good populations of native crayfish until at least the 1980s. The river's waters were used in cloth and woollen blanket making in Witney from mid 17th century.[1]

In 2007, the Windrush was one of many rivers in the area to flood. Towns and villages along the entire length of the river were affected, but particular problems were caused in Witney, which was cut in half by the closure of the only bridge across the river.[2] 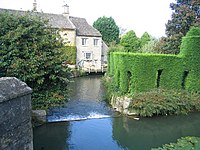 The River Windrush at Burford
Retrieved from "https://wikishire.co.uk/w/index.php?title=River_Windrush&oldid=7891"
Categories: