Grisedale Pike is a fell in Cumberland, within the Lake District. The fell is to be found four and a half miles west of Keswick, in the North Western Fells of Lakeland.

At a height of 2,593 feet it is the 40th highest of the ‘Wainwrights’; those fells to which Alfred Wainwright devoted a chapter in his books.[1]

Grisedale Pike presents a striking appearance when viewed from the east, particularly from the vicinity of Keswick. It possesses two subsidiary summits: one unnamed (usually referred to as 'subsidiary summit', situated above Hobcarton Crag); the other Hobcarton End. 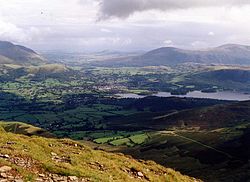 Eastward from the summit to the Vale of Keswick and Derwentwater

Grisedale Pike is a large fell throwing down three long ridges to the valley floors and two shorter ones that link to the adjoining fell of Hopegill Head and the strategically important Coledale Hause which links the fell to the rest of the Coledale Fells. It is bounded to the south by the two and a half mile valley of Coledale and to the north by the Whinlatter Pass which carries the B5292 road. The village of Braithwaite sits at the foot of the long eastern ridge, and some of the northern slopes have been planted by the Forestry Commission, with the Hospital Plantation occupying much of the valley of Grisedale.

Of the subsidiary summits:

The ridge is composed of the laminated mudstone and siltstone of the Kirkstile Formation, typical of the Skiddaw group.[2]

The Coledale side of the fell has been extensively mined, with the Force Crag mine being the last working lead mine in the Lake District before closing in 1990; it also produced zinc and barite. The mine has had many owners and been closed and reopened regularly since the early nineteenth century. The mine suffered a major collapse in 1990 which led to the owners, the New Coledale Mining Company, deciding to close it.

The majority of ascents of Grisedale Pike usually start at the village of Braithwaite using a well blazed trail up the eastern ridge. An alternative ascent starts at a car park in Hospital Plantation near the top of the Whinlatter Pass and goes up the northern ridge taking in the “Nuttall” top of Hobcarton End before continuing to the summit. From the same starting point it is possible to climb the fell up the north eastern ridge following a ruined dry stone wall.

Grisedale Pike is often included in the circular walk called the Coledale Round, an eleven mile walk starting and finishing at Braithwaite. It includes the other fells of Hopegill Head, Eel Crag, Sail, Scar Crags and Causey Pike with over 4,250 feet of ascent.

The view from the top of the fell is comprehensive with the Cumberland coast in view to the west and the Pennines seen in the distance to the east. On a clear day the view can extend to mountains far beyond the Lake District.

The hills near Belfast (about 110 miles away) are visible over the sea to the west. In the north, the Southern Uplands can be seen, including Merrick, White Coomb and the little coastal hill, Criffel. Closer to, in Lakeland, is the Lord's Seat.

The distant skyline continues over the Kielder Forest hills to reach The Cheviot before it is interrupted by the Skiddaw group and Blencathra with the Vale of Keswick and Bassenthwaite Lake in the foreground. The Pennines around Cross Fell are visible to the east.

The Helvellyn Range occupies the skyline to the east, fronted by the High Seat ridge, and in front of that, Catbells and Causey Pike. The Pennines, specifically Ingleborough, can be seen to the south-east. Closer to are the Langdale Pikes, the Coniston Fells, Bowfell and mighty Scafell Pike behind the Dale Head group.

To the south-west the view is dominated by Crag Hill and Grasmoor. A small portion of Snowdonia can become visible too, and above Hopegill Head can be seen the Isle of Man and Slieve Donard in the Mourne Mountains of County Down.