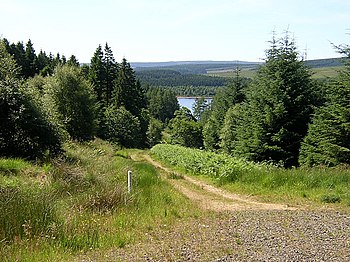 In the Kielder Forest

Kielder Forest is a large forestry plantation in Northumberland, surrounding the reservoir Kielder Water. It is one of the largest planted woodland forests in the land. The majority of the forest lies within The Border Forest Park with the southern tip, known as Wark Forest, lying within Northumberland National Park.

The forest is owned and managed by the Forestry Commission, which initiated the first plantings in the 1920s. During the 1930s, the Ministry of Labour supplied men from among the ranks of the unemployed. Many came from the mining communities and shipyards of Northumberland and County Durham. They were housed in one of a number of instructional centres created by the Ministry, most of them on Forestry Commission property; by 1938, the Ministry had 38 Instructional Centres across Britain. The hutted camp in Kielder is now under Kielder Water. Numerous purpose-built villages were also constructed for workers' families, including Stonehaugh. 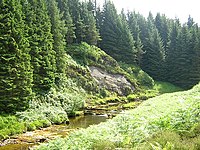 Before the 1920s, the land was predominantly open moorland, managed for grouse shooting and sheep grazing with remnants of native upland woodland existing along stream sides and in isolated craggy areas. The Forestry Commission, funded from the public purse, purchased land across the country with the brief of establishing a strategic reserve of timber for the nation. This single objective held sway until the 1960s. Since that time, management principles have changed in order to reflect rising awareness of environmental needs and to provide recreational facilities whilst seeking to maintain a sustainable supply of timber. Kielder today remains state-owned and its development from a single-objective plantation to a multi-purpose forest mirrors the development of plantation forestry across the United Kingdom. 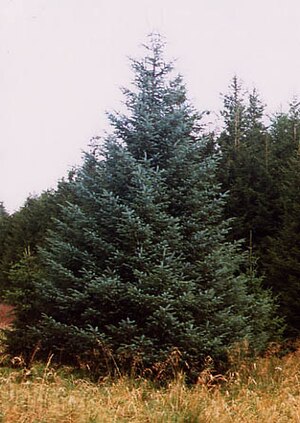 The name 'Kielder Forest' is often also applied to the area of hills and remote moorland that surround the forestry plantations. The group of hills merges into the Cheviots to the northeast but is generally well-defined on other sides. It reaches a maximum height of 1,975 feet at Peel Fell and also contains Sighty Crag and Larriston Fells. These hills, despite not being very high, are particularly remote owing to the scarcity of settlement in the region. Indeed, Sighty Crag is the furthest hill in England from a road. 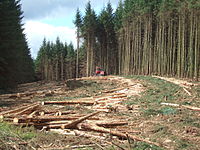 16,774,000 cubic feet of timber is harvested annually to supply local sawmilling, chipboard, pulp and wood fuel customers. Most of this volume comes from clearfelling areas; an increasing percentage however is sourced from stands harvested under continuous cover silviculture systems. Clear felled areas are replanted with a mix of coniferous and broadleaf tree species, opportunities are also taken to increase the proportion of open space and to improved the riparian habitat. As with all Forestry Commission woodlands timber is independently certified under the Forest Stewardship Council scheme.

The forest contains a number of sites of special scientific interest, primarily associated with the upland moorland environment. A programme of restoration of Border Mires is ongoing. The forest is one of the last English strongholds of the red squirrel, and provides excellent habitat for many species of birds of prey. In 2009 a pair of osprey nested successfully in the forest. This pair have continued to nest there each year since, and a second pair nested in the forest in 2011.[1] A large population of roe deer is actively managed.

Many archaeological remains can be found within the forest and are an important cultural link to the often turbulent history of the Middle Shires. 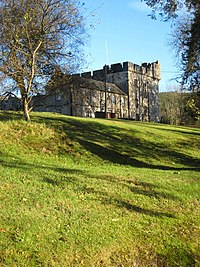 Kielder Castle Visitor Centre is an 18th-century hunting lodge built by the Duke of Northumberland, which has been converted into a visitor and information centre. It is located on the edge of Kielder Village at the head of the River North Tyne valley.

The Castle serves as a hub for the growing number of recreational facilities on offer, walking and cycling trails, picnic areas and a forest drive.

The forest contains a number of art and architectural installations including a Skyspace[3] designed by James Turrell and Wave Chamber, a camera obscura in a stone cairn by Chris Drury.