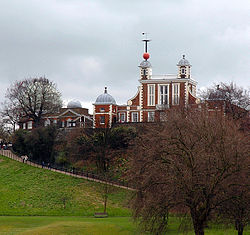 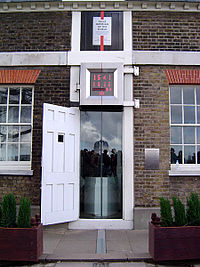 The Prime Meridian marked at Greenwich

The Greenwich Meridian or the Prime Meridian is the line of longitude defined to be 0°, from which therefore all maps measure longitude.

The meridian's southernmost landfall in the British Isles is Peacehaven in Sussex and its northernmost is Tunstall on Holderness, in East Riding of Yorkshire, after which it passes over no land until its end at the North Pole. It passes through:

The Prime Meridian and its opposite the 180th meridian (at 180° longitude), which the International Date Line generally follows, form a great circle that divides the Earth into the Eastern and Western Hemispheres.

The Greenwich Meridian was determined by the Royal Greenwich Observatory and became the standard prime meridian for British maritime charts.

Other nations adopted other standards, resulting in a multiplicity of inconsistent charts to the annoyance of navigators. Ultimately an international standard had to be adopted. By the time of the International Meridian Conference held in Washington DC in the United States in October 1884, some 70% of the world's shipping was using charts based on the Greenwich Meridian and so, as the foremost world standard, it was adopted. The French delegation abstained in the vote.

"the meridian passing through the centre of the transit instrument at the Observatory of Greenwich".

Thus all the longitudes of the world are defined by the cross-hairs on the telescope in the Royal Greenwich Observatory.