Peacehaven is a town on the coast of Sussex. It stands above the chalk cliffs of the South Downs approximately six miles east of the centre of Brighton, on the A259 road. Its site coincides with the point where the Greenwich Meridian crosses the south coast of Great Britain. It was created as a speculative investment in 1916, at the height of the Great War and named New Anzac-on-Sea, soon changed to the hopeful "Peacehaven".

Manhas been here long before the town existed. A Bronze Age barrow, a burial mound, has been identified very close to the cliff top.[1] The barrow represents evidence of the occupation of Peacehaven at least 3,500 years ago. A 2007 excavation of the new housing development to the west of Peacehaven Community School's playing fields unearthed an astonishing range of evidence for a prehistoric settlement throughout the Bronze and Iron Ages.

Peacehaven itself has only existed since 1916. Its founder, Charles Neville, had bought land in the parish of Piddinghoe and then set a company up to develop the site. He advertised it by setting up a competition to name the development, although the newspaper concerned — the Daily Express— sued Neville over the competition, holding that it was a scam, since he was offering "free" plots of land in the town as runner-up prizes, but issuing them only on the payment of a conveyancing fee. The exact name of the winner is unknown only it is believed to be a member of the Fearby family. The newspaper won the case, but the publicity brought the scheme to a large audience. The name chosen — New Anzac-on-Sea — lasted less than a year: the Gallipoli campaign which brought fame to the Anzacs (the Australia and New Zealand Army Corps) became bogged down and bloody and this led Neville to rename his development "Peacehaven". By 1924 there were 3,000 people living in Peacehaven.

The town, apart from the newer development to the west named Telscombe Cliffs & above Firle Road, still retains its original "grid" layout: rectangular plots of land on both sides of the main road. There are no "Streets" in Peacehaven, originally there were only "Roads" and "Avenues". With very few exceptions, "Roads" run east to west, and "Avenues" north to south — most forming crossroads where they intersected the South Coast Road (A259). Apart from this road, Roderick Avenue, running roughly up the centre, was the only surfaced road (except for the area of Local Authority housing around Friars Avenue (north)) in Peacehaven until the late 1950s, when the process of "making-up" the roads began. This started in Telscombe Cliffs and worked eastwards. As part of this, many of the Avenues had their junction with the main road blocked off, to reduce the number of junctions, and mainly eliminate crossroads.

Original houses were often very temporary affairs set up by those who had bought plots - some were old railway carriages, others were constructed from former army huts, brought from North Camp near Seaford. A few of these still survive, having been given an outer concrete block wall (they can be identified by their oblong shape that tends to be end on to the road). Peacehaven eventually grew to be larger in area even than Lewes.

The pebbly beach below the cliffs can be reached by means of a pathway. There is an area of common land in the town now called The Dell, which sits between the A259 and the cliffs. A cinema formerly stood on this site.

The Dell holds many events during the year from car boot sales and entertainments such as fireworks to fairgrounds, motorhome exhibitions, the Donkey Derby and an annual carnival, though in 2005 the carnival was held on the Joff field located behind the Meridian shopping centre. In the 1950s, the carnival stalls were located on the then vacant land on the NW corner of the South Coast Road (A259) and Dorothy Avenue.

The chalk cliffs at Peacehaven

The parish includes part of the Brighton to Newhaven Cliffs Site of Special Scientific Interest. The cliffs are mainly of geological interest, containing many Santonian and Campanian fossils. The SSSI listing includes flora and fauna biological interest too.[2]

The Greenwich Meridian is marked by an 11½ foot obelisk commissioned by Charles Neville. It was unveiled on 10 August 1936 and has been relocated twice due to erosion of the cliffs.[3] 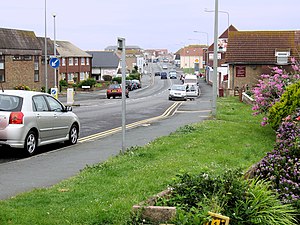 The A259 running through the town

Although an independent town, Peacehaven relies heavily on the bordering town of Brighton. Many local residents commute into work on a regular bus link and most travel into Brighton for shopping and other leisure activities. Being in such close proximity to Brighton and the reliance upon it for local amenities has led to a considerable "Brighton feel" to the town, in which many of the residents will tell outsiders that they are "from Brighton".

There is a leisure centre and the Co-operative Meridian Shopping Centre; there are also four schools in Peacehaven: Hoddern Junior school; Peacehaven Infants School; Meridian School and Peacehaven Community School; a police station, a dentist, several doctors’ surgeries and a plentiful supply of pubs and restaurants located throughout the town. These include the independent fast food outlet "Big Mouths" on the corner of the South Coast Road and Horsham Avenue, which leads the town's al fresco dining, and the eye-catchingly named "Grindlestonkers" towards the east. There are four churches; the parish church is the Church of the Ascension, and serves both Peacehaven and Telscombe Cliffs. There are dance schools, such as Harlequin and Studio 54, as well as numerous football and martial arts clubs.

The Peacehaven & District Chamber of Commerce was created in February 2007. The Chamber organises regular networking and support meetings for the benefit of its members plus an annual Trade Show to promote local services. 2009 saw the first Business Awards ceremony in which the winners in each category received a "Monument" to mark their achievement.

Peacehaven in literature and popular culture