Lochnagar is a mountain in Aberdeenshire, and part of the Mounth. Its height of 3,789 feet qualifies it as a Munro, and it is one of the best loved of these.

The mountain is found about five miles south of the River Dee near Balmoral, and since the days of Queen Victoria it has been a favoured spot by the Royal Family.

Beinn Chìochan ("Mountain of breasts") is an alternative Gaelic name,[1] after the shape of the hill. 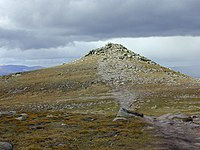 The summit of the mountain has its own name, Cac Carn Beag, which means "small dung-pile", hardly appropriate to a magnificent mountain but perhaps for its summit pile.

Lochnager is undoubtedly the best Munro in the Mounth in terms of beauty and spectacle, and often said to be one of the best in the Highlands. It has both grand height and fine features, of which the finest is the huge corrie stretching out round the curved summit ridge. There are 600-foot cliff drops to the secluded lochan which gives the mountain its name.

The breathtaking cliffs are well seen from the approach in from the Spittal of Glenmuick. They are popular amongst rock climbers, and ice climbers in winter, but most will want a more conventional climb to the summit, usually up the east rim of the corrie.

The main summit, Cac Carn Beag, is on the north-western corner of the corrie, while a subsidiary top, Meikle Pap, is further southeast, on the plunging rim of the corrie.

The south-western slopes of Lochnager contrast to that of the north; here broad ridges lead to the rest of the Munros of the White Mounth, of which Carn a Choire Bhoidheach is the nearest. 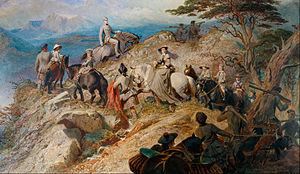 Morning in the Highlands - the royal family ascending Lochnagar, by Carl Haag

The most common ascent route is from Glen Muick. Inviting as it may be, there can be poor visibility on the top, which, perched at the edge of the cliffs, is a real hazard. Also, Lochnager is prone to avalanches and has been the site of several fatalities over the years.

Lochnager and rest of the hills of the White Mounth can be climbed in one day, though the usual tour would mean an approach from the west, missing the best views of the mountain. Lochnagar should nevertheless be done and enjoyed as one of the greats. The peak also lends its name to the poem Lachin y Gair (also known as Dark Lochnagar) by Lord Byron, and the song based on it.

Lochnagar is located on the Royal Estate of Balmoral, and the mountain itself has royal links, oft frequented as it is by princes. It is the setting for a children's story, The Old Man of Lochnagar by Charles, Prince of Wales.

In the film Mrs Brown, John Brown and Benjamin Disraeli hike up Lochnagar to discuss the need for Queen Victoria to return to active involvement with government.

A malt-whisky distillery located near the Balmoral estate on the south side of the River Dee produces the Royal Lochnagar Single Malt whisky.

The mountain is a site for breeding Dotterel (Charadrius morinellus) and this has led it to be designated as a Special Protection Area.

"Lochnagar" is the name of a crater in the Somme valley created by a massive mine explosion during the First World War.