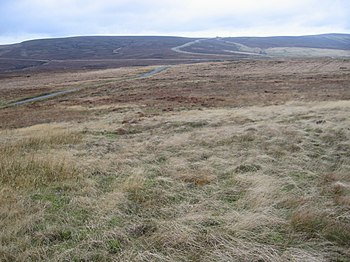 Axe Edge Moor is the major moorland south-west of Buxton in the Peak District, spread over the borders of Derbyshire, Staffordshire and Cheshire. It is mainly gritstone (Namurian shale and sandstone). Its highest point (1,808 ft) is at SK035706, which is just is slightly lower than Shining Tor (three miles to the north-west, across the modest dip of the incipient Goyt Valley).

The moor is the source of three noteworthy rivers:

Cheeks Hill on the moor has Staffordshire's highest point, at the apex of the county's border with Derbyshire here.

On the moor is England's second-highest public house (the Cat and Fiddle Inn).

The three shires of Derby, Stafford and Chester meet the south-western flank of the moor at Three Shires Head on the River Dane.

The Axe Edge itself is on the south-eastern edge, near the source of the Dove.