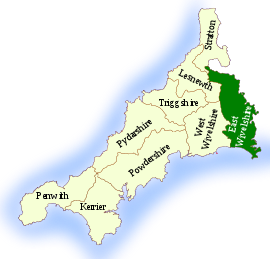 East Wivelshire is the south-easternmost of the ten hundreds of Cornwall, along the lower reaches of the River Tamar and the manifold creeks that indent its complex estuary and as far north as Launceston. The hundred is the eastern part of the wider district known as Wivelshire. It is identified on Ordnance Survey maps and census reports as simply the East Hundred. It had a population of 71,779 in 2011, falling to 71,203 if detached parts are disregarded.

The ancient parishes of East Wivelshire are: