Edvin Loach otherwise Edwin Loach is a village that forms a detached part of Worcestershire, locally situate in eastern Herefordshire. It is situated about four miles north of the town of Bromyard, and near the village of Edwyn Ralph. Edvin Loach lies in the upper division[1] of Doddingtree[2] hundred.

Edvin Loach Old Church was built in the mid 11th century or later and was dedicated to St Giles. It is built within the earthworks of a Norman motte and bailey castle. The church was re-dedicated later to St Mary.[3]

The old church gradually became dilapidated, though its roof was still intact as late as the 1890s. It is in the guardianship of English Heritage. 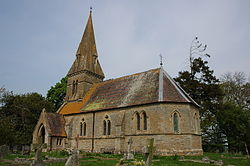 Today's parish church is also St Mary's. The new church was designed by Victorian architect Sir George Gilbert Scott in 1860, stands next to the ruins of the old.[4] This is a fine example of 19th-century church architecture designed in the Early English style.

This Worcestershire article is a stub: help to improve Wikishire by building it up.
Retrieved from "https://wikishire.co.uk/w/index.php?title=Edvin_Loach&oldid=40316"
Categories: