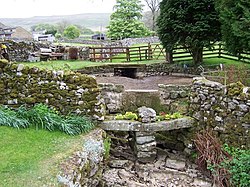 Cracoe is a small village and civil parish in the West Riding of Yorkshire. It is situated near to Rylstone and about six miles south-west of Grassington. The civil parish originates as a township in the ancient parish of Burnsall parish. It has a post office under the Skipton area.[1]

Cracoe has an estimated population of 160 residents, measured at 178 in the 2011 census.[2] Cracoe is a village which is also situated near Rylstone beneath Barden Fell and the twin skyline landmarks of Rylstone Cross and Cracoe Pinnacle in the Yorkshire Dales.[3]

Evidence of an army training camp can be seen on the south-east edge of the village. The circular earthworks visible from Fell Lane are searchlight battery emplacements. The village is located five and a half miles north-west of Skipton. The name of the village can be seen as famous in geological circles - for the nearby Cracoe Reef Knolls, a series of limestone hills which are geological remnants of an ancient coral reef.

Cracoe was also the home of the original Calendar Girls, who raised money to support the Leukaemia Research Fund, by posing for a nude calendar.[6]

On 5 July 2014, the Tour de France Stage 1 from Leeds to Harrogate passed through the village.[7]