Blackfriars Bridge is a road and foot traffic bridge over the River Thames in the City of London, between Waterloo Bridge and Blackfriars Railway Bridge, carrying the A201 road. The north end, in Middlesex, is near the Inns of Court and Temple Church, along with Blackfriars station. The south end, on the Surrey bank, is near the Tate Modern art gallery and the Oxo Tower.

The River Fleet empties into the Thames under the north end of Blackfriars Bridge. 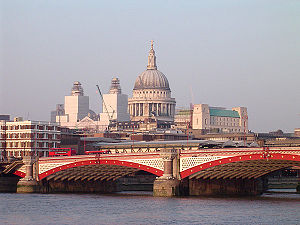 The first fixed crossing at Blackfriars was a 995 foot long toll bridge designed in an Italianate style by Robert Mylne and constructed with nine semi-elliptical arches of Portland stone. Beating designs by John Gwynn and George Dance, it took nine years to build, opening to the public in 1769. It was the third bridge across the Thames in the then built-up area of London, supplementing the ancient London Bridge, which dated from several centuries earlier, and Westminster Bridge. It was originally named "William Pitt Bridge" (after the Prime Minister William Pitt the Elder) as a dedication, but its informal name relating to the precinct within the City named after the Blackfriars Monastery, a Dominican priory which once stood nearby, was generally adopted. It was later made toll free.

The City of London Corporation was responsible for promoting it and the location between the other two bridges was chosen because it was realised that the disused wharfage of the lower River Fleet from the Thames to what became Ludgate Circus would allow access into the north bank without unduly disrupting the neighbourhood; hence its name of New Bridge Street. The Fleet can be seen discharging into the Thames at its north side. By taking an access road from its southern landing to a junction with the routes created to simplify passage between those bridges to its east and west to the south it would also add to those improvements. This created the junction at St George's Circus between Westminster Bridge Road, Borough Road and the later named Blackfriars Road which crossed the largely open parish of Christchurch Surrey. The continuation to the south at the major junction at Elephant and Castle is therefore named London Road.

Although the 1769 bridge was built of Portland stone, the workmanship was poor and the structure faulty. Between 1833 and 1840 extensive repairs were necessary, and a good deal of patching-up was done, until at last it was decided to build a new bridge on the same site and this coincided with the creation of the Thames Embankment's junction with the new Queen Victoria Street required a major reconfiguration. This is the present bridge which in 1869 was opened by Queen Victoria.[1]

The present bridge is 923 feet long, consisting of five wrought iron arches built to a design by Joseph Cubitt. Cubitt also designed the adjacent rail bridge (now demolished) and it was a condition that the spans and piers of the two bridges be aligned. It was built by P.A. Thom & Co.[2] Like its predecessor it is owned and maintained by the Bridge House Estates, a charitable trust overseen by the City of London Corporation. Like London Bridge the full length and its southern end are deemed to be within the City's borders. Due to the volume of traffic over the bridge, it was widened between 1907–10, from 70 feet to its present 105 feet.

On the piers of the bridge are stone carvings of water birds by sculptor John Birnie Philip. On the East (downstream) side (the side closer to the Thames Estuary and North Sea), the carvings show marine life and seabirds; those on the West (upstream) side show freshwater birds – reflecting the role of Blackfriars as the tidal turning point.

Temperance, a statue atop a drinking water fountain at the north end of Blackfriars Bridge

On the north side of the bridge is a statue of Queen Victoria (funded by Sir Alfred Seale Haslam[3]), to whom the bridge was dedicated.

The ends of the bridge are shaped like a pulpit in a reference to Black Friars.[4]

The bridge gave its name to Blackfriars Bridge railway station on the southern bank which opened in 1864 before closing to passengers in 1885 following the opening of what is today the main Blackfriars station. Blackfriars Bridge station continued as a goods stop until 1964 when it was completely demolished, and much of it redeveloped into offices.

The structure was given Grade II listed status in 1972.[5]

The bridge became internationally notorious in June 1982, when the body of Roberto Calvi, a former chairman of Italy's largest private bank, was found hanging from one of its arches with five bricks and around $14,000 in three different currencies in his pockets. Calvi's death was initially treated as suicide, but he was on the run from Italy accused of embezzlement and in 2002 forensic experts concluded that he had been murdered by the Mafia, to whom he was indebted.[6] In 2005, five suspected members of the Mafia were tried in a Rome court for Calvi's murder, but all were acquitted in June 2007 for lack of evidence.[7] 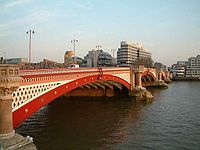 In 1774 the new bridge was mentioned in a popular song in Charles Dibdin's opera The Waterman,[8] referring to the boatmen who used to carry fashionable folk to Vauxhall Gardens and Ranelagh Gardens.

And did you not hear of the jolly young waterman,
Who at Blackfriars Bridge used for to ply?
And he feathered his oars with such skill and dexterity,
Winning each heart and delighting each eye.

The name 'Blackfriars Bridge' was given to one of the Bailey Bridges cast over the Rhine River in 1945, by the Royal Engineers that built it.

In Neil Gaiman's Neverwhere, "Blackfriars Bridge" was named as the home of an unknown order of monks who held the key to an angelic prison.

The bridge is also featured in the lyrics of the songs "The Resurrectionist" by the Pet Shop Boys, and "Cold Bread" by Johnny Flynn & The Sussex Wit]].

In Louis A. Meyer's Bloody Jack: Being An Account of the Curious Adventures of Mary "Jacky" Faber, Ship's Boy, Jacky is introduced as an orphan in early 19th-century London who lives with her orphan gang under Blackfriars Bridge.

In the film The Avengers, the bridge is destroyed by a tornado.

The bridge is also cited in several Italian songs referring to the death of Roberto Calvi: "Via Italia" by Gang and "Nostra signora dei depistati" by Modena City Ramblers.

In Terry Gilliam's The Imaginarium of Doctor Parnassus (2009), Heath Ledger's character Tony is found hanging under the Blackfriars Bridge, described by Terry Gilliam as "an homage to Roberto Calvi".[9]

In Cassandra Clare's book series "The Infernal Devices", Tessa and Jem meet here every year, and also get married here.