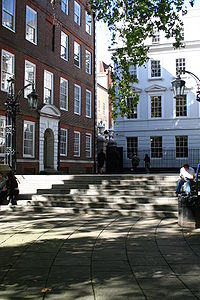 In the Middle Temple

The four Inns of Court are not a town nor village as such but are so distinct and self-contained that they deserve a look on their own. These are perhaps the last remaining examples of mediæval inns, but grown so large that one might doubt that any other inn of those days could have compared with any of the Inns of Court.

The common origin of the Temples is in the mediæval holdings of the Knights of the Temple, a very wealthy and well-connected military-religious order that fought in the crusades but was dissolved in 1312. Their lands passed to the Knights of the Hospital of St John, and after the Reformation, when the Hospitallers were dissolved, the lawyers, long since inhabiting the Temples, continued to assert to independence of the City authorities which the Knights had enjoyed.

This Middlesex article is a stub: help to improve Wikishire by building it up.
Retrieved from "https://wikishire.co.uk/w/index.php?title=Inns_of_Court&oldid=7630"
Categories: