Today the church is jointly owned by the Inner Temple and Middle Temple,[1] two adjacent Inns of Court whose precincts also take their name from the Knights of old.

The church is part of the Church of England but is a 'peculiar', a privately owned church excluded fom the jurisdiction of the Diocese of London.

The Temple Church, showing the chancel and east end

The church is famous for being a round church, a common design feature for Knights Templar churches, and for its 13th and 14th century stone effigies.

The church building comprises two separate sections. The original circular church building, called the Round Church and now acting as a nave, and a later, rectangular section adjoining on the east side, built approximately half a century later, forming the chancel.

The church was heavily damaged by German bombing during Second World War and has since been restored and rebuilt.

The area around the Temple Church, the Inner Temple and Middle Temple, was an estate of the Knights Templar until the order’s dissolution in 1307, and thereafter of the Knights Hospitaller until the Reformation, since when the estate has been owned by the Society of the Inner Temple and the Society of the Middle Temple, for the use principally of barristers’ chambers. The Society’s have long claimed exemption from the jurisdiction of the Corporation of London as having inherited the privileges of the Knights Templar and Hospitaller, and in the same way the Temple Church has exemption from normal ecclesiastical structures.

The Temple Church in 1892, by Herbert Railton

In the mid 12th century, before the construction of the church, the Knights Templar in London had met at a site in High Holborn in a structure originally established by Hugues de Payens. Because of the rapid growth of the order, by the 1160s the site had become too confined, and the Order purchased the current site for the establishment of a larger monastic complex as their headquarters in England. In addition to the church, the new compound originally contained residences, military training facilities, and recreational grounds for the military brethren and novices, who were not permitted to go into the City without the permission of the Master of the Temple.

After the capture of Jerusalem in 1099 by the Crusaders, the Dome of the Rock was given to the Augustinians, who turned it into a church while the Al-Aqsa Mosque became a royal palace. The Knights Templar, who believed the Dome of the Rock was the site of the Temple of Solomon, later set up their headquarters in the palace adjacent to the Dome for much of the 12th century. The "Templum Domini", as they called the Dome of the Rock, featured on the official seals of the Order's Grand Masters (such as Everard des Barres and Renaud de Vichiers), and soon became the architectural model for Round Templar churches across Europe.

The round church is 55 feet in diameter, and contains within it a circle of the earliest known surviving free-standing Purbeck Marble columns. It is probable that the walls and grotesque heads were originally painted in colours. 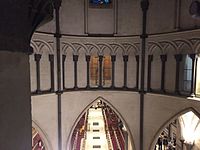 The circular triforium in the round church of 1185

The Order of the Knights of the Temple was a very wealthy order, and powerful in England: the Master of the Temple sat in parliament by right as primus baro (the first baron in precedence of the realm). The compound was regularly used as a residence by kings and by legates of the Pope. The Temple also served as an early safety-deposit bank, sometimes in defiance of the Crown's attempts to seize the funds of nobles who had entrusted their wealth there. The quasi-supra-national independent network and great wealth of the Order throughout Europe, and the jealousy this caused in secular kingdoms, is considered by most commentators to have been the primary cause of its eventual downfall.

In January 1215 William Marshal, 1st Earl of Pembroke (who is buried in the nave next to his sons, and is represented by one of the nine stone effigies) served as a negotiator during a meeting in the Temple between King John and the barons, who demanded that the king should uphold the rights enshrined in the Coronation Charter of his predecessor and elder brother King Richard I. Marshall swore on behalf of the king that the grievances of the barons would be addressed in the summer, which led to the signing by the king of Magna Carta in June.

Marshall later became regent during the reign of John's infant son, King Henry III (1216–1272). Henry later expressed a desire to be buried in the church and in order to accommodate this, in the early 13th century the chancel of the original church was pulled down and a new larger chancel was built, the basic form of which survives today. It was consecrated on Ascension Day 1240 and comprises a central aisle and two side aisles, north and south, of identical width. The height of the vault is 36 feet 3 inches. Although one of Henry's infant sons was buried in the chancel, Henry himself later altered his will to reflect his new wish to be buried in Westminster Abbey.

Sequestration of the Order

In 1307, the Knights Templar were dissolved as an Order in England and in Europe. King Edward II]] took control of the church as a Crown possession, and later it was later given to the Knights Hospitaller, who leased the Temple to two colleges of lawyers. One college moved into the part of the Temple previously used by the Knights, and the other into the part previously used by its clergy, and both shared the use of the church. The colleges evolved into the Inner Temple and the Middle Temple, two of the four London Inns of Court. 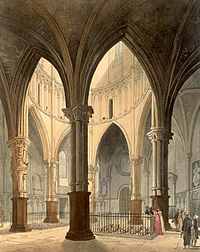 The interior of the Round Church in the early 19th century

In 1540 the church became the property of The Crown once again when King Henry VIII abolished the Knights Hospitaller in England and confiscated their property. Henry provided a priest for the church under the former title "Master of the Temple".

In the 1580s the church was the scene of the Battle of the Pulpits, a theological conflict in the Church of England between the Puritans and the mainstream of the Church. Shakespeare was familiar with the site and the church and garden feature in his play Henry VI, Part 1 as the setting for the fictional scene of the plucking of two roses of York and Lancaster and the start of the Wars of the Roses. In 2002 this event was commemorated with the planting of new white and red roses in the modern gardens.

Following an agreement in 1608 by King James I, the two Inns were granted use of the church in perpetuity on condition that they should support and maintain it. They continue to use the Temple church as their ceremonial chapel.

The church escaped damage in the Great Fire of London of 1666. Nevertheless, it was refurbished by Christopher Wren, who made extensive modifications to the interior, including the addition of a screen and the installation of the church's first organ. The church underwent a Victorian restoration in 1841 by Smirke and Burton, who decorated the walls and ceiling in high Victorian Gothic style in an attempt to return the church back to its supposed original appearance. Further restoration work was executed in 1862 by James Piers St Aubyn.

On 10 May 1941, German incendiary bombs set the roof of the Round Church on fire,[3] and the fire quickly spread to the nave and chapel. The organ and all the wooden parts of the church, including the Victorian renovations, were destroyed and the Purbeck marble columns in the chancel cracked due to the intense heat. Although these columns still provided some support to the vault, they were deemed unsound and were replaced in identical form. The original columns had a slight outward lean, which architectural quirk was followed in the replacement columns.

During the renovation by the architect Walter Godfrey, it was discovered that elements of the 17th century renovations made by Wren had survived in storage and these were replaced in their original positions. The church was rededicated in November 1958.[4] 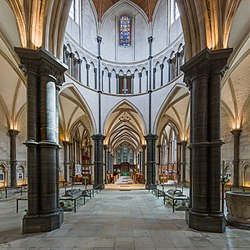 The interior of the Round Church, facing the chancel 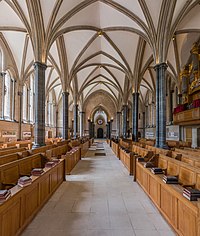 The interior of the Chancel facing toward the Round Church

Master of the Temple